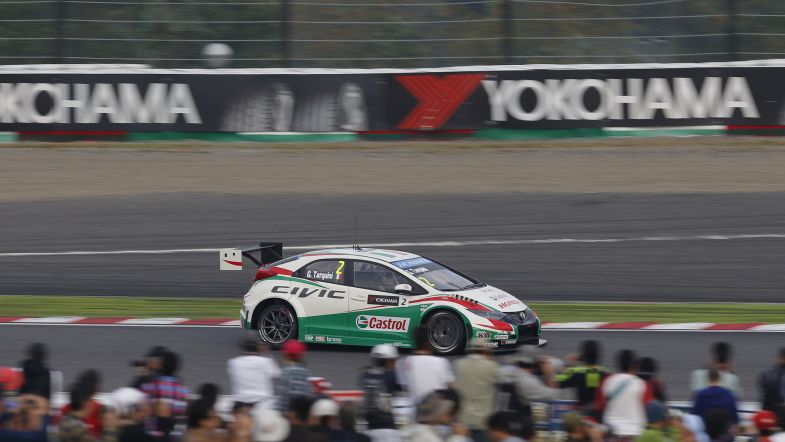 Gabriele Tarquini takes first win of the season in Japan

Gabriele Tarquini took a dominant first win of the season at the second race in Suzuka. The Honda driver claimed the win at Honda’s home track ahead of Dusan Borkovic, who drove a faultless race in his Campos Racing Chevrolet RML Cruze. Norbert Michelisz completed the podium to add to Honda’s celebrations for the day.

At the start Gabriele Tarquini retained the lead from pole position ahead of Dusan Borkovic and Norbert Michelisz. Drama started soon as the Serbian and the Hungarian made contact at the final chicane, with the Chevrolet remaining ahead of the Honda. Behind them, Hugo Valente was defending his fifth from the Citroën squad, with Yvan Muller ahead of Sébastien Loeb and José María López.

The battle raged on until Yvan Muller cannoned into Hugo Valente, with the Chevrolet driver leaving the door open down the inside and inviting an attack, sustaining damage to his Cruze and was forced to retire. Shortly after that López managed to pass team-mate Loeb for sixth.

The Citroëns started attacking Tom Coronel but the Dutchman managed to fend off Muller to keep his fourth place despite the Frenchman giving his best to overtake the Chevrolet.

Gabriele Tarquini won the race ahead of Dusan Borkovic, with Norbert Michelisz completing the podium. Tom Coronel claimed a strong fourth for ROAL Motorsport ahead of the Citroën trio, with Muller leading the newly-crowned champion José María López and Sébastien Loeb. Gianni Morbidelli finished eighth ahead of Honda’s Tiago Monteiro, with Tom Chilton taking the final point in his ROAL Chevrolet.

At the time of writing Yvan Muller is under investigation for the contact with Hugo Valente at the hairpin.

Next up for the FIA World Touring Car Championship is the season finale at Macau, believed to be the final time the WTCC will race there, in three weeks time.