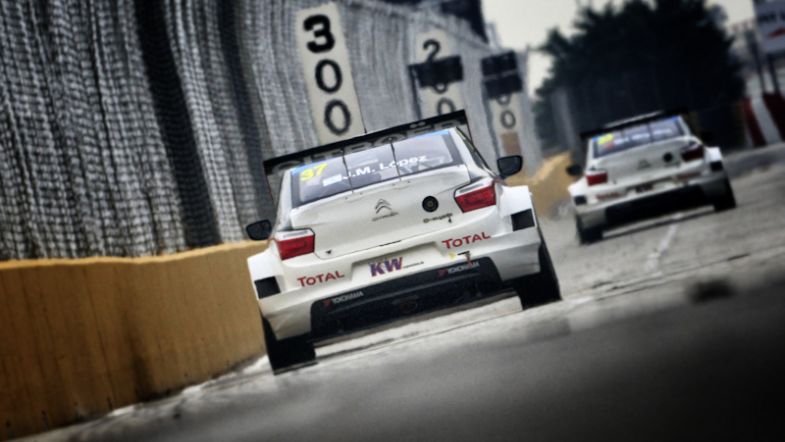 Five Citroëns on the grid in 2015, López, Muller and Loeb stay on

There will be five Citroën C-Elysée WTCCs on the grid in the 2015 FIA World Touring Car Championship season, with 2014 champion José María López, four-time WTCC champion Yvan Muller, and nine-time WRC champion Sébastien Loeb staying in the three factory cars. Sébastien Loeb Racing will join the Championship and will run a two-car satellite programme next season with two of this year’s cars.

Citroën Total WTCC have dominated in their first season in the Championship, with José María López rocketing to the title in his debut season, and with the French manufacturer wrapping up the manufacturers’ title three events early.

After a successful first season, with drivers Muller, López and Loeb all sharing wins, as well as a victory for occasional driver Ma Qing Hua on his debut in Russia, scoring the first win for a Chinese driver in an FIA Championship, Citroën see no need to change things next season.

“We were completely satisfied with our drivers, and they didn’t have any thoughts of going elsewhere, so it was easy to sort out,” said team principal Yves Matton.

“José María López has had the perfect season this year, thanks to his unwavering commitment. He has blazed a trail for a new generation of drivers, but now he will have to defend his title, and he will be up against some highly motivated rivals, not least his own team-mates.

“Despite his unflagging efforts throughout the year, Yvan Muller has really been short of success, and he is eager to start afresh next season and go after a fifth world title. After achieving his first race wins in the discipline this year, Sébastien Loeb will be looking to do even better next season. Switching from rallying to track racing was a huge challenge to take on, but he has already shown that he has all the qualities necessary to become one of the best drivers in the competition.”

The team will now also support a customer programme from next season, with Sébastien Loeb Racing joining the Championship, adding another two TC1 class cars to the grid.

Team owner, and continuing factory Citroën driver Sébastien Loeb said:
“Since it was created, SLR has amassed real know-how at international circuits, in both GT and sports prototype racing. The FIA WTCC marks a new stage in the team’s development.

“I didn’t have to think for very long when the opportunity presented itself for the 2015 season. Since the new TC1s were introduced, the championship has been attracting more and more interest, and it’s great for Sébastien Loeb Racing to be involved.”

Yves Matton added:
“The two cars will be good-as-new reconditioned 2014 chassis, complete with all the developments we introduce next season. It’s now up to the team to finalise its agreements as far as its drivers are concerned, but we are all working together to make it possible for Ma Qing Hua to continue his FIA WTCC career with Citroën. His performances have shown that he deserves the chance to race a full season in 2015.”