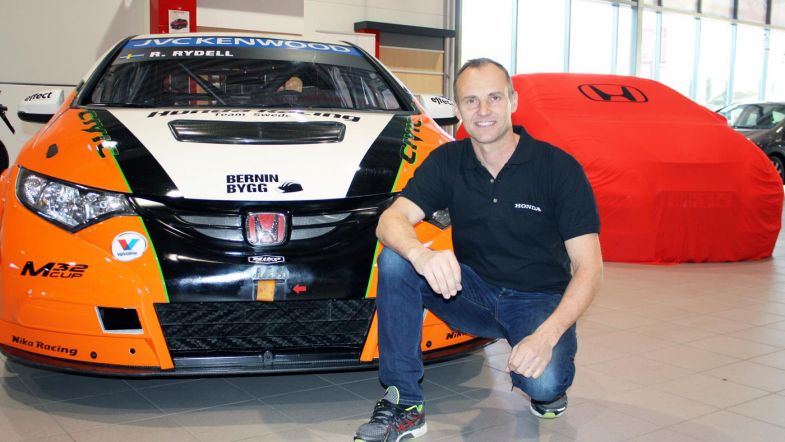 Rickard Rydell all set for his WTCC return next season

Former British and Scandinavian Touring Car champion Rickard Rydell is ready to make his World Touring Car Championship return after five years away from racing full-time in the series in 2015, competing with a new manufacturer in his career with Honda’s TC1 Civic, which he will be able to start testing at the latest in February.

Rydell will be run by NIKA Racing, the team with which he won the STCC drivers’ title in 2011. The team also enjoyed a strong first full season in the 2013 WTCC, and was on course to finish second overall in the drivers’ championship with Michel Nykjaer until the final few rounds when Nykjaer and the team parted ways.

NIKA Racing made a one-off appearance this year at the Hungaroring, running a two-year-old Civic in the TC2T class for Yukinori Taniguchi, but will be back on the grid with a new Civic in the TC1 class built by JAS Motorsport from the first round in Argentina with Rydell.

“I’m ready, and looking forward to it. it’s going to be really fun to do a full season again in the WTCC,” said Rydell to TouringCarTimes. “Nicklas (Karlsson) who’s running the team NIKA Racing, has done a lot of work in the last year or so for next year, I know Honda Sweden is very much involved in the programme, so it’s looking good.

“We’ll get the car at the end of January, though of course since the first race is quite early next year so we’re not going to get much testing. We hope to be able to do a couple of different tests at a couple of tracks for a few weeks in February, then the car goes to Argentina.”

“I hope to be out a bit before then maybe in JAS’s test car…that will be good to learn the car before we have our own car. So for sure, the preparation is not going to be as much as we would like to, but as long as we can do a couple of tests at different circuits, we’re going to learn.”

Rydell was one of the competitors in the very first season of the WTCC, taking five wins with SEAT and one with Chevrolet at his home race at Anderstorp, and hopes to be back for at least two years with NIKA Racing, now known as Honda Racing Team Sweden, and next year he’ll join the championship’s 100 WTCC Races Club at the third round of the championship at the Hungaroring.

“I see this as a two-year thing, getting ready this next year and learn and try to do as well as possible, have a couple of good results and maybe be at the top the following year,” he said.

With five years away from the championship, and with many new events on the calendar, the 47-year-old Swede would seemingly have the deck stacked against him with a whole new car to learn as well as a new set of tracks, but notes that the numbers don’t look as bad as you would suspect.

“I was looking at it and it’s quite good actually as there are also new tracks for most drivers,” he reasoned. “I think Argentina, Slovakia and Russia are the only ones I don’t know which the others know, but the rest of the circuits, either I know or no else does. I’ve even been to test at Qatar with SEAT once, though that was quite a few years back . Paul Ricard I also know from my years with Aston Martin in sports cars. So three out of 12 is not so bad.”