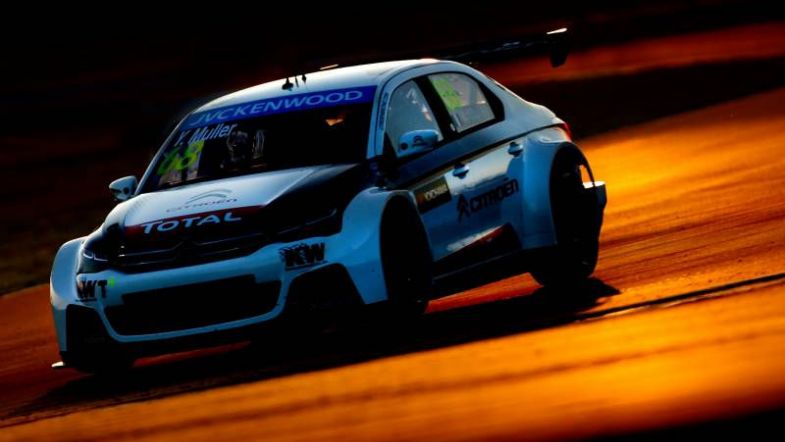 Citroën to finish its WTCC programme at the end of 2016

Citroën Racing have confirmed that they will withdraw from the World Touring Car Championship at the conclusion of the 2016 season, during which they will reduce their programme to just two cars for José María López and Yvan Muller, with Sébastien Loeb switching to Peugeot’s Cross-Country Rally World Cup programme as well as competing in the Dakar Rally.

The French manufacturer has dominated the WTCC since it joined the championship at the start of the 2014 season, coming in at the introduction of the new TC1 specification Super 2000 cars. López has won the drivers’ titles twice ahead of the season’s end, with Citroën comfortably wrapping up the manufactuers’ title ahead of closest challenger Honda.

Citroën had announced earlier this year they would soon make a decision as part of PSA Peugeot-Citroën’s review of its motorsport programmes which discipline to focus on from 2017, and have today confirmed that it will focus on the World Rally Championship, with which they won nine drivers’ titles with Sébastien Loeb between 2004 and 2012.

“Rallying is a fascinating sport, which tests the performance, reliability and solidity of the cars and drivers in some magnificent settings. The category is taking off again, with increasingly widespread live television coverage and the arrival of China on the calendar in 2016. In 2017, the appearance of a new generation of cars will coincide with our renewed involvement.

“Everything will therefore be in place for us to write a new chapter in the brand’s history. Given Citroën’s rich heritage, this challenge had to be ambitious with new objectives that will motivate the team and ensure continual success.”

Citroën will sit out the 2016 WRC season however to focus on developing their new rally car for the 2017, using the development of the Citroën C-Elysée WTCC’s engine, and expects to have a tough battle during its last year of competition in the WTCC with Volvo joining the fray next year.

“Still determined to make the most of our resources, we will de defending our titles with a team of two works cars,” said Citroën Racing team principal Yves Matton.

“With the arrival of a new, ambitious manufacturer, we’re expecting the competition to be even tougher next year. Pechito and Yvan are used to working together and making the success of the team their number one priority. Next year, they will need to be even more together to enable Citroën to conclude its programme successfully. Other Citroën C-Elysée WTCCs may be entered by the Sébastien Loeb Racing team for private drivers.”

“The last two years have undoubtedly been the greatest of my career. I am therefore delighted to be able to continue competing with Citroën Racing in 2016,” said López. “We are going to keep working, all together, so that the Citroën C-Elysée WTCC remains the category’s leading car. And our goal is to defend our titles.”

“I’m proud to have taken part in building what is currently the best team in the WTCC. I’m also honoured to have been chosen to continue competing on behalf of Citroën.
“We have to adjust to the new shape of the team, but we can count on the talent and experience of the team to maintain the same level of excellence.”