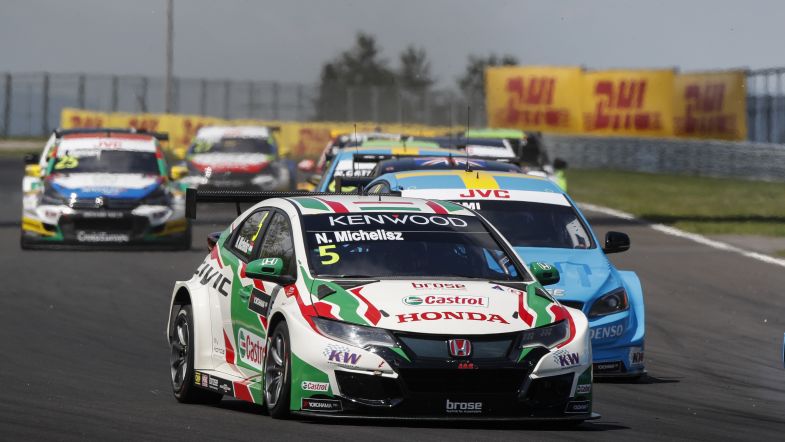 Honda’s Norbert Michelisz surprised the paddock after he began to talk about backing up team-mate Tiago Monteiro during the remaining races, after a mixed race day where he failed to finish Race 1 and finished fourth in Race 2, leaving his home race joint-seventh in the standings, 61 behind Monteiro.

Michelisz said the team might need to think tactically sooner rather than later, despite their being seven races left in the season.

“It’s not the best of my season starts so far,” said Michelisz. “The championship lead is a bit far ahead, so the main focus for me is to score a lot of points, and if I’m in a position to help Tiago in the rest of the races and he does not struggle with bad luck, I think it’s the best I can do.”

When pushed to explain what he meant, Michelisz added:
“I’m not giving up on the title – but from the team’s perspective, the most important thing is to win the championship. You cannot really predict what points will make the difference – it’s not about letting Tiago past at every possible position, but we have to be really tactical about winning the title.”

The first driver surprised by Michelisz’s comments was team-mate Monteiro, who explained it was probably an overreaction from the Hungarian.

“I think he’s down a bit now after having a bad weekend at home,” said Monteiro to TouringCarTimes.

“He’s a very human person and he feels things quite hard, but I’m sure tomorrow morning he’ll wake up and he’ll think ‘why on earth did I say that!?’ – I can trust him enough to know that if things keep going like this, in a few races he’ll be happy to help me, but it’s too early for him to give up right now. It totally came from his heart because he’s a bit low.”

Rob Huff, who also suffered a mixed weekend, dropping from third to sixth after a penalty in Race 2, said it’s too early to start writing off title ambitions for anyone.

“We’re only three rounds in,” said Huff to TouringCarTimes. “All we need is Tiago to have one bad round and everyone’s straight back in it again. He’s only 38 points ahead and there are still over 400 points left. I was quite surprised that Michelisz was seeming mentally defeated – the championship is long, the top six or seven are still pretty close.”