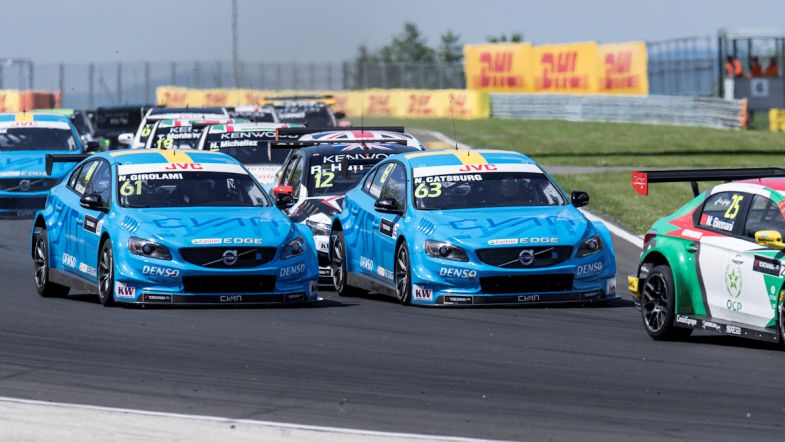 Münnich Motorsport’s Rob Huff has accepted the blame for the incident at the start of Race 2 which saw the British driver given a drive-through penalty, taking away an almost-certain victory at the Hungaroring.

Huff made a slow start and was down to fourth by the first corner, but battled back against the two Volvos of Néstor Girolami and Nicky Catsburg ahead, but made contact with Catsburg at Turn 2, propelling him into Girolami, knocking the Argentinian out of the race.

“I bogged down at the start, but recovered a little bit into Turn 1, and into Turn 2 Nicky caught me out just by braking a little bit early,” said Huff to TouringCarTimes.
“Ultimately it’s my fault, it was a misjudgement on my side. I don’t remember the last time I caused an accident.

“The penalty was probably fair, as it resulted in someone not finishing the race, but it would be nice to have the same rules all the time. In Race 1, I got drilled into the chicane by Esteban (Guerrieri), who knocked me into Bebu (Girolami), and nothing happened from that.”

Catsburg, who ran into Girolami after the contact from Huff and took him out of the race, was sorry for his team-mate and thankful to Huff for his apology.

“I have to say thanks to Rob for admitting that he hit me, that’s very gentlemanly,” said Catsburg. “But unfortunately I hit my team-mate Néstor, which is really unfortunate. I feel bad about that, as he deserves to have a good result too.”

Néstor Girolami was very upset after the incident, following a strong result in Race 1 where he’d finished in fourth position.

“If we started the weekend again, I’d have done exactly the same,” said Girolami to TouringCarTimes. “I’m very self-critical, but here, I did a perfect start, and I was around the inside of my team-mate around corner two…for one moment I didn’t understand what had happened, as I thought it was Nicky that hit me, but I didn’t see Rob.”