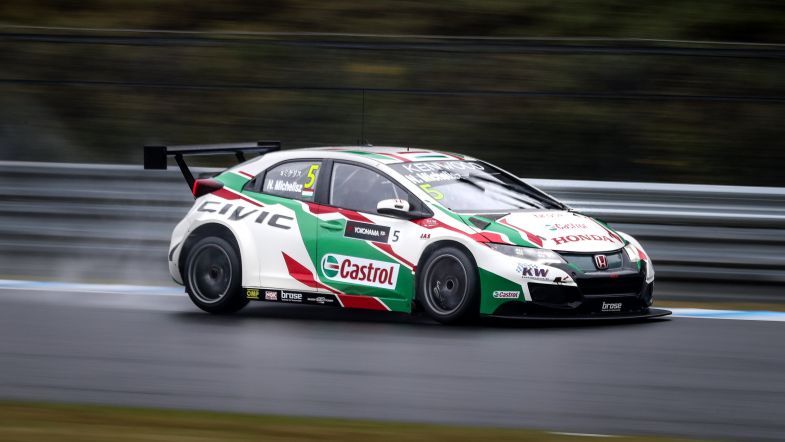 Honda driver Norbert Michelisz has taken his third pole position of the 2017 World Touring Car Championship season at Motegi, outqualifying Volvo’s Nicky Catsburg by over three-tenths of a second in a wet qualifying session late on Sunday morning.

The Hondas had looked unstoppable after practice, but in the first part of qualifying it became clear that the Polestar Cyan Racing Volvos had been holding something back, with Nicky Catsburg setting the fastest time in the first segment in his S60 TC1.

The most notable names to miss the cut to go through into Q2 were Münnich Citroën driver Rob Huff and ROAL Chevrolet driver Tom Coronel, with Zengõ Motorsport’s Daniel Nagy springing a surprise and breaking through to Q2 in his privateer Honda Civic with the 12th fastest time.

Catsburg again led the way in Q2, finishing ahead of the Hondas of Norbert Michelisz, Ryo Michigami and Esteban Guerrieri, with Michigami making it through to the top five shootout for the first time, and Guerrieri making the shootout on his Honda debut.

Néstor Girolami made a late improvement to go fifth and secure his place in the shootout, which was to the detriment of team-mate and championship leader Thed Björk, with the Swede therefore gaining no additional points in qualifying.

In the top five shootout, Girolami set a good benchmark as he went out first with a time of 2:09.824, with Guerrieri and Michigami next out and were unable to improve on his time, but Michelisz was on another level, going almost a second faster on his lap.

Behind the top five was Thed Björk in the Volvo, with Mehdi Bennani the best-placed Citroën in seventh, with RC Motorsport Lada driver Yann Ehrlacher eighth, Tom Chilton ninth in his Citroën and with Kevin Gleason tenth and securing pole position for the opening race in his RC Motorsport Lada.