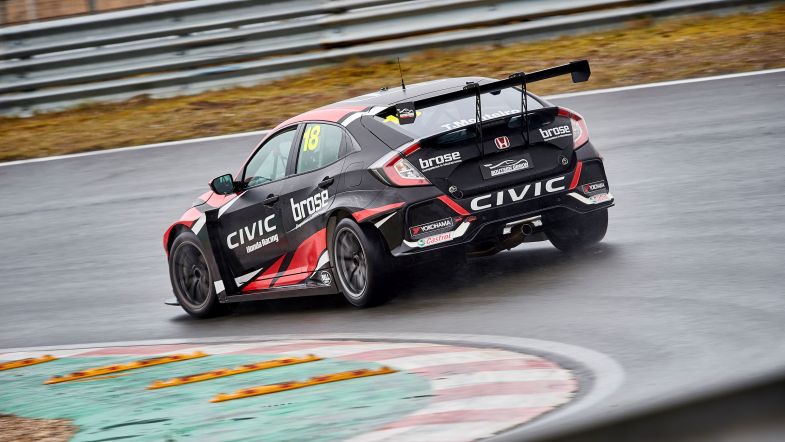 Honda have confirmed the speculation yesterday in the Belgian media that Tiago Monteiro will not be able to race at the opening round of the World Touring Car Cup in Morocco, with his spot in the Boutsen Ginion Racing team being filled by 2017 TCR Benelux champion Benjamin Lessennes.

41-year-old Monteiro has been hard at work on his fitness after a horrific crash in testing last August, which ruled him out of the final four rounds of the 2017 World Touring Car Championship, which destroyed his title aspirations.

Monteiro had driven the new tenth-generation Honda Civic TCR in testing at Monza and Zandvoort earlier this month, but the bulk of the driving duties were performed by rising star Lessennes.

Honda have now confirmed that Monteiro will be stood down until he’s able to take the wheel of the new Civic, with Esteban Guerrieri the Japanese manufacturer’s sole placement in the WTCR for the first round in Morocco, racing for the Münnich Motorsport team.

“I knew this was a possibility as the way the human body is not an exact science,” said Monteiro. “Although my physical condition has recovered extremely well, the same has not yet happened with my vision and the result is that I cannot yet return to competition.

“My recovery has been remarkable and the treatment I’ve received from my medical team has been incredible, but I simply cannot take the risk at this stage. I did everything that was within my reach, but both my body and vision are not yet fully recovered. I must take this opportunity to thank the fantastic team that has worked tirelessly to support me through this difficult process. Of course, I’m incredibly disappointed.

“I wanted the effects of the accident to be behind me and to start afresh for the new season. That’s not possible just yet, but I will continue my recovery as hard as I can in the expectation that everything will return to normal soon. Until then, I will support the team and my Honda colleagues and use my experience and knowledge as much as possible to help them achieve strong results. I may not be on-track, but I will be on-hand to make as much of a contribution as I can. It is very important to maintain team spirit and provide this support.”

Lessennes’ confirmation means the 18-year-old will be the youngest driver on the grid, three years younger than rival Honda driver Yann Ehrlacher, who is team-mate to Guerrieri at Münnich Motorsport.

“I am very pleased to make my FIA WTCR race debut with Boutsen Ginion Racing, although I wish it had been in happier circumstances,” he said. “I don’t know how many races I will do before Tiago returns to his car, but I would like to send my best wishes to him for a speedy recovery. I have some good experience of the new Honda Civic Type R TCR from having tested late last year and – more recently – with Boutsen Ginion Racing at Zandvoort. I’m confident we can do a good job, although it is very clear that the level of competition in WTCR this year will be higher than what we’ve faced previously.”