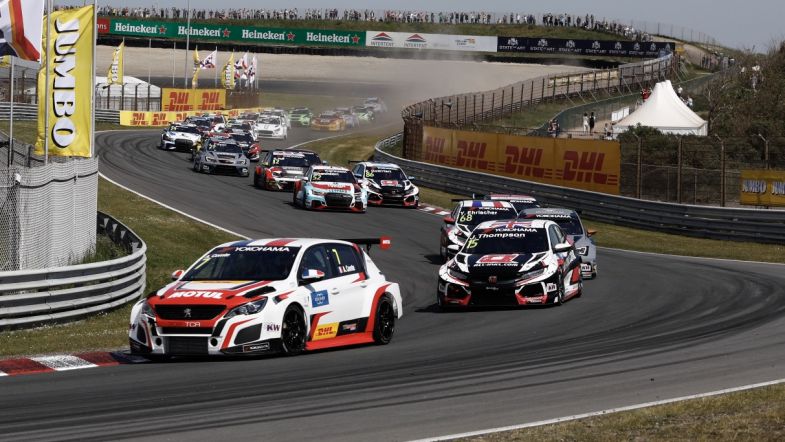 Aurélien Comte takes the first victory for Peugeot at Zandvoort

DG Sport Compétition driver Aurélien Comte has won the first race for Peugeot in the World Touring Car Cup in Race 2 at Zandvoort, finishing ahead of the two Münnich Motorsport Hondas of Yann Ehrlacher and James Thompson.

As anticipated, Race 3 pole-sitter Jean-Karl Vernay started from the pit lane and soon abandoned the race after he was due to start 27th on the grid due to an engine change, while Thompson lined up on pole position in the Honda Civic TCR.

Comte got the jump on Thompson into Turn 1, with Pepe Oriola holding station in third in the Campos Cupra TCR, with Yann Ehrlacher making one position at the start to move into fourth in the Münnich Honda.

Comte began to pull away before the safety car was called on lap five after Aurélien Panis in the Comtoyou Racing Audi and Fabrizio Giovanardi in the Mulsanne Alfa Romeo crashed out of the race, with both cars requiring recovery.

The race restarted after two laps, with Comte again able to pull away from Thompson, while Oriola was now defending hard to keep back Ehrlacher.

On lap ten, while WRT Audi driver Gordon Shedden was battling for fifth with SLR Volkswagen driver Mehdi Bennani, Shedden was overtaken by the Münnich Honda of Esteban Guerrieri, but the Scotsman was able to get back ahead three laps later at Scheivlak.

On lap 12, Ehrlacher made his move on Oriola and stole the final podium position from Oriola, with the Spaniard battling back to try and take the position back but to no avail.

On the final lap, Thompson, whose a part-time replacement for René Münnich at the team, pulled over and allowed Ehrlacher through to maximise the points for his team-mate, which now means Ehrlacher is just one point behind his uncle Yvan Muller in the standings.