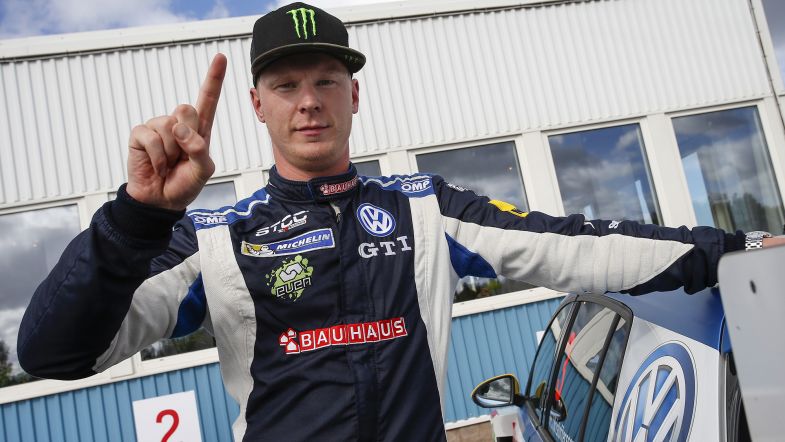 Two-time World Rallycross champion and reigning STCC champion Johan Kristoffersson has been confirmed to make his World Touring Car Cup debut alongside Rob Huff and Mehdi Bennani at Sébastien Loeb Racing (SLR) in 2019, as reported by us earlier this week.

“I’m very much looking forward to the WTCR,” said Kristoffersson.

“After four years of rallycross, 2019 will be my first full touring car season on the international stage since 2013. Most of the circuits are entirely new territory for me and therefore represent a huge challenge. I’m also looking forward to working with my new teammates, especially touring car world champion Rob Huff. What’s more, Sébastien Loeb Racing is an experienced team and I’m delighted to be moving within the Volkswagen family.”

SLR will increase its fold and run four Volkswagen Golf GTI TCRs during the 2019 WTCR season, with Rob Huff and Mehdi Bennani returning to race with the team, with Huff and Kristoffersson both supported by Volkswagen Motorsport Customer Racing.

“The World Touring Car Cup is an excellent platform for the Golf GTI to show off its sporty performance to a global fan base,” said Volkswagen Motorsport director Sven Smeets.

“In addition, the competition is stiff, and this is reason enough for Volkswagen to up its involvement. I’m delighted that we will have Rob Huff and Mehdi Bennani on board once again next year in the GTI. Together with our rallycross champion Johan Kristoffersson, this makes for a very strong line-up of drivers for us in 2019.”

Huff and Bennani will continue with the French team after finishing eighth and 12th overall respectively this year, while the fourth Volkswagen driver is yet to be confirmed.

“I am delighted to be tackling the WTCR with Sébastien Loeb Racing once again in 2019 and I hope to be a contender for the championship title,” said Huff.

“It’s great that Volkswagen has decided to up its involvement in the event to four Golf GTI TCR vehicles. One of my new team-mates will be Johan Kristoffersson, who has a more than impressive WRX season under his belt. And he is already familiar with the Golf GTI TCR. Working with him will no doubt be exciting.”

“I can look back on a good WTCR season with Sébastien Loeb Racing,” said Bennani. “The highlights were without a doubt my podium finish at home in Morocco and, of course, my win in Wuhan. It’s obviously fantastic for me to be competing with SLR yet again next year. I’m very much looking forward to it.”

Kristoffersson has not yet confirmed whether he will return to defend his STCC title with Kristoffersson Motorsport, but they’ve stated that they are evaluating the situation ahead of next year as there are no clashes between the WTCR and STCC.

The 2017-2018 World Rallycross champion has confirmed that he will not defend his title, with there being six clashes with the WTCR in 2019.