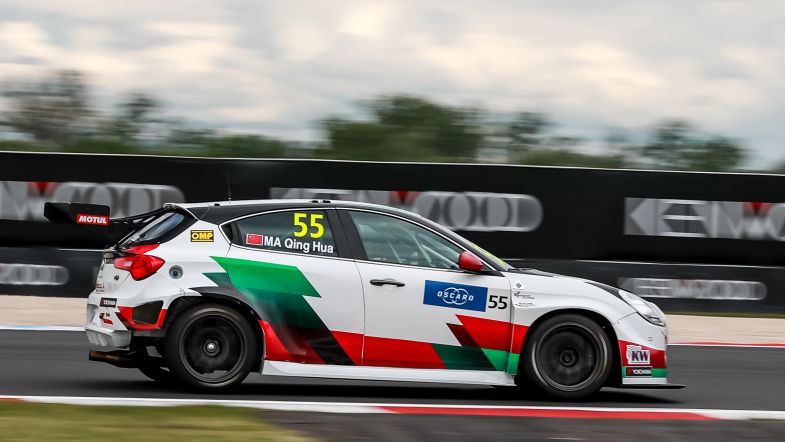 Ma Qing Hua took the first win of the season for the Team Mulsanne Alfa Romeo squad in the third race at the Slovakiaring, finishing ahead of BRC Hyundai driver Norbert Michelisz, with Kevin Ceccon completing the podium for the Italian team.

Just as in Race 1, Ma Qing Hua shot away from the line in third and into the lead into Turn 1, with pole-sitter Nicky Catsburg having to slot into second ahead of his BRC Hyundai team-mate Michelisz.

There was trouble further back for championship leader Néstor Girolami, who was forced out wide in the melee and dropped to the back of the pack.

The PWR Racing Cupras were on the move early on, both passing the Honda of Esteban Guerrieri and moving up to sixth and seventh with Daniel Haglöf leading Mikel Azcona.

On lap five, Catsburg’s challenge began to fade as the Hyundai driver developed an intermittent problem and lost pace, falling behind team-mate Michelisz’s Hyundai and the Alfa Romeo of Kevin Ceccon.

Azcona passed team-mate Haglöf a lap later for P6, which soon became P5 as Catsburg continued to drop down the order with his problem persisting.

Haglöf also fell behind Guerrieri’s Honda and found himself wandering into the P10 batttle between Sébastien Loeb Racing’s Rob Huff and Hyundai driver Gabriele Tarquini, and as Haglöf locked up he managed to run into the back of Huff’s car and into the Cupra of Tom Coronel, who had been carving his way through the order.

The damage to Coronel’s car would see him fall back down the order, while Huff was relegated to 13th.

Up front, Michelisz was briefly threatened by Ceccon for second, but the Hungarian was able to break away and keep hold of second at the finish, and leaps to third in the drivers’ championship as a result.

Niels Langeveld took his best result of the season with fourth in the Comtoyou Racing Audi, with Mikel Azcona the top Cupra in fifth.

Esteban Guerrieri’s sixth place sees the Münnich Motorsport Honda driver close to two points of team-mate and points leader Néstor Girolami in the standings, while Thed Björk was the top of the Lynk & Co drivers in 11th, rounding off a disastrous weekend for the Chinese manufacturer.

The next round of the championship takes place at Zandvoort next weekend.