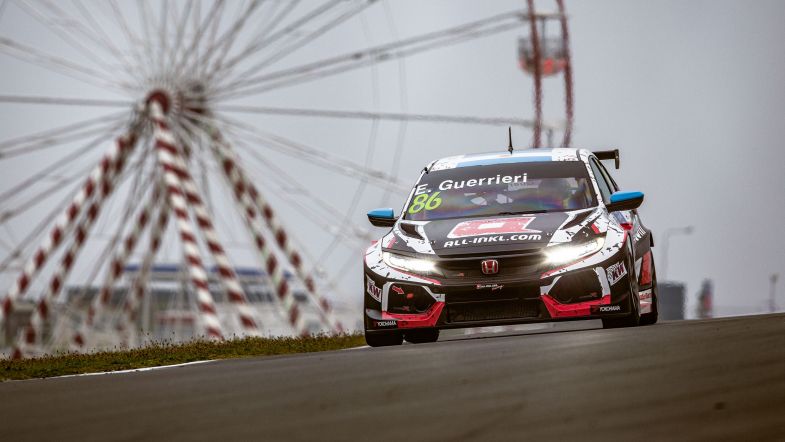 Esteban Guerrieri led from lights-to-flag in the second race of the weekend at Zandvoort, holding off the two Sébastien Loeb Racing Volkswagen Golfs of Benjamin Leuchter and Johan Kristoffersson, to extend his points lead to 20 over team-mate Néstor Girolami.

Guerrieri led from pole into the first corner ahead of Leuchter and Kristoffersson, while Yvan Muller picked up a position from sixth on the grid in his Cyan Racing Lynk & Co 03 TCR to move up to fifth ahead of Mikel Azcona’s PWR Racing Cupra.

The race was soon suspended behind the safety car as Attila Tassi in the KCMG Honda made contact with Tom Coronel’s Comtoyou Racing Cupra at Schievlak and went off into the gravel trap.

The race restarted on lap five, with Muller making an unforced error at the Arie Luyendyk Bocht and ran wide, dropping to eighth, before losing a further position to his Cyan Racing team-mate Yann Ehrlacher on the following lap.

Yesterday’s race winner Thed Björk then lost a position to SLR’s Rob Huff also on lap five, with the Briton taking 11th place from the Swede in the final overtake in points-paying positions of the race.

Guerrieri held off Leuchter’s Volkswagen on every lap, with the Golf flashing its lights at every opportunity to try and distract the Argentinian, but to no avail, with Guerrieri winning the race by three-tenths of a second.

Guerrieri’s win means he now has a 20-point lead in the championship over Guerrieri, with Björk now 28 points behind, meaning one of the Münnich Hondas will still leave Zandvoort with the drivers’ championship lead.

The final race of the day, with Lynk & Co’s Yann Ehrlacher starting from pole position, takes place at 16:35 CEST.