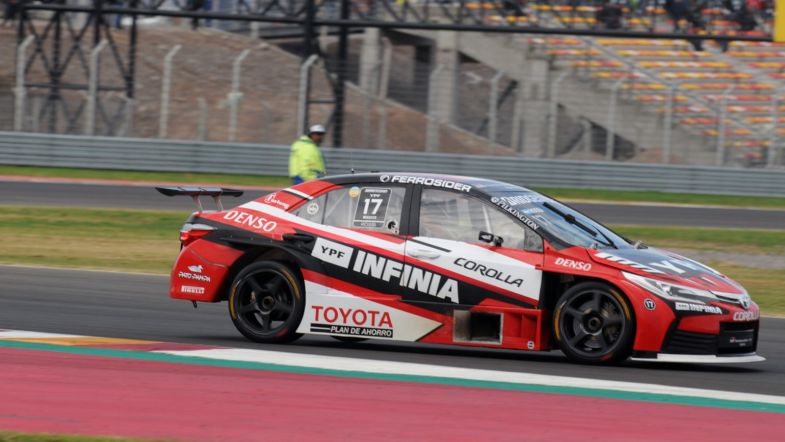 Chevrolet’s Agustín Canapino stalled on the grid when the lights went out, so did Facundo Ardusso of Renault. Mariano Werner could not avoid the stalled Ardusso, crashing into the back of his Renault Fluence. Moments later, Fiat driver Matías Muñoz Marchesi crashed into both of them and the race was red flagged.

The race was restarted with a rolling start and the Toyota duo took the lead again, Rossi ahead of Santero followed by Canapino, who had stalled at the start but was able to rejoin the restart.

Canapino’s team-mate Bernardo Llaver grabbed fourth at the restart ahead of Facundo Chapur of Citroën. But it was not long until Llaver started to drop back and was overtaken by Chapur and Matias Milla.

Canapino retired on lap four due to a technical issue that limited his engine to 3,000 rpm, confirmed after the race by Chevrolet YPF team owner Luciano Monti.

The safety car came out on track due to the retirement of Canapino. The restart saw Milla overtaking Chapur for third. And Chapur retired close to the end of the race due to a steering issue, handing fourth to Renault driver Leonel Pernia.

The chequered flag came out on lap 23 with Rossi and Santero claiming a 1-2 win for Toyota, followed by Milla of Renault, five seconds adrift. Pernía crossed the line in fourth position ahead of Honda Racing team-mates José Manuel Urcera and Ricardo Risatti, rounding off the top six.

Pernía leads the standings on 58 points, Santero is second on 37 points while Rossi and Ardusso are tied in fourth position on 32 points.