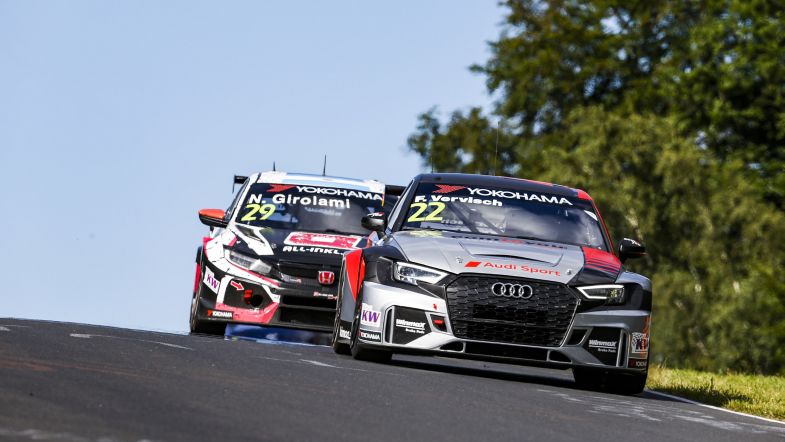 Frédéric Vervisch, Rob Huff and Néstor Girolami have all been given formal reprimands by the stewards for their battles at the Döttinger Höhe straight at the Nürburgring, after the three drivers made side-by-side contact while fighting each other for the final podium spot.

At the end of the second lap, Comtoyou Racing Audi driver Vervisch, and Girolami’s Münnich Motorsport Honda made light contact as the two drivers drag raced down the straight, and unexpectedly handed Rob Huff the perfect tow which allowed him to cleanly pass the pair of them.

A lap later, and Girolami then cruised up to the rear of Huff’s Sébastien Loeb Racing Volkswagen Golf GTI TCR, with the two also running into each other’s sides as they battled down the long Döttinger Höhe back straight.

“It was a great move with Vervisch and Néstor, that was cool,” said Huff to TouringCarTimes.

“I gained 15km/h in their double slipstream, so I really enjoyed that – and then it was fine with Néstor, but then he hit me twice just from jinking unnecessarily aggressively on the back straight, but I think he and Vervisch had probably wound each other up on the lap before,” he added.

Girolami was unaware of the contact, explaining: “I just felt a big hit and was a little bit worried.”

The stewards reviewed the incident and gave all three drivers an official reprimand for the contact down the back straight, but no grid or times penalties.