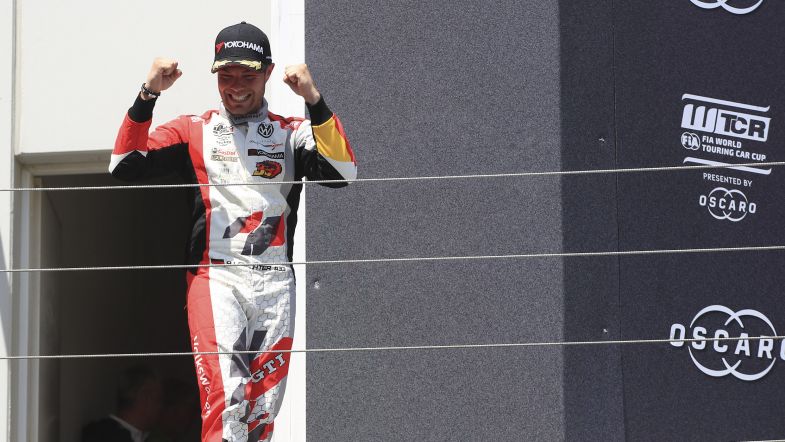 Benjamin Leuchter more than doubled his points tally for the year after a fantastic weekend with the Sébastien Loeb Racing Volkswagen, with Leuchter scoring overall pole and a Race 3 victory, despite pressure from both the Audi of Frédéric Vervisch, and the Münnich Honda of Esteban Guerrieri.

The 31-year-old, who has the most experience around the epic Nordschleife circuit of anyone on the grid, scored Volkswagen’s first outright pole of the year for Race 3, just ahead of team-mate Rob Huff.

With Huff unable to make the start of Race 3 due to a collision in the second race with the Hyundai of Gabriele Tarquini, Leuchter was left to fend for himself at the start of Race 3, where he fought to keep back the Honda of Guerrieri on lap one, before Vervisch emerged as his main threat after the Audi driver got past Guerrieri at the Döttinger Höhe straight.

“I am so happy, over the moon,” said Leuchter.

“This is the racing I love and what I was searching for, with the world’s best touring car drivers on this track. To be honest, the race was one of the best of my life. It was on the edge with Esteban twice on the first lap, after the start first, and then at the very last corner second. It was awesome, I really wanted to win, so I pushed really hard.

“I connect my while life to this track. I almost grew up here. When I was first racing in 2008, I won my first ever race on this track. To be here now racing against the best touring car drivers in the world and to win the main race here means so much to me.

“Thanks to all the guys who made this happen to put me into this World Touring Car Cup, thanks to my whole family, and everybody who has supported me through my whole life. I’m just so, so happy.”