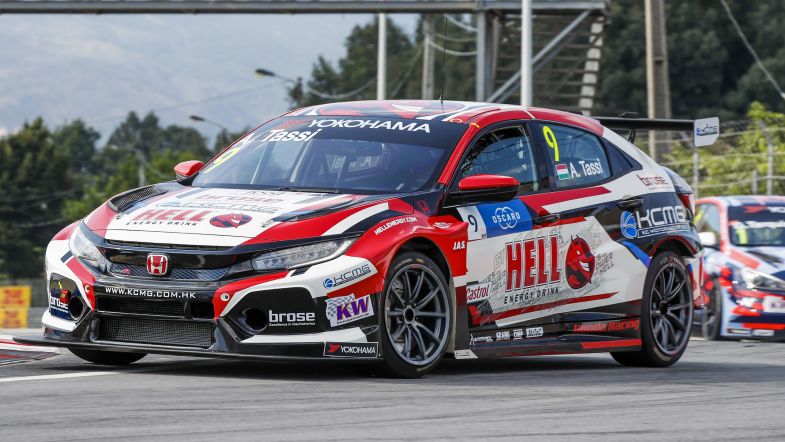 Attila Tassi took his first career pole position in the World Touring Car Cup at Vila Real, in a session which was a complete turnaround from yesterday, but the 19-year-old’s record-breaking pole plays alongside the story of Tiago Monteiro securing the front row spot alongside in his Civic TCR.

Augusto Farfus’ session came to an early end when he crashed his BRC Hyundai i30 N TCR into the barriers, and dragged his damaged car back to the pit lane.

The session continued on around him, and then at the end there were some dramatic scalps, with yesterday’s race winner Norbert Michelisz missing the cut and qualifying in 16th position, just ahead of team-mate Gabriele Tarquini.

This meant Nicky Catsburg was the only Hyundai to make the top 12 cut, while Rob Huff was the only one of the Volkswagens to make it through, while all four of the Hondas showed a remarkable increase in pace and made it into Q2, with Attila Tassi fastest in Q1 in his KCMH Honda, just ahead of the two Team Mulsanne Alfa Romeo Giulietta Veloces.

There was an extended gap to Q2 as the barriers Farfus had collided with were repaired.

At the start of Q2, Tassi broke the lap record on his first run with a time of 1:59.445, while Kevin Ceccon smashed into the same barriers Farfus had hit in Q1 on his second flying lap, losing his fastest time as a result, with the red flags deployed ahead of a long repair.

Rob Huff in the Sébastien Loeb Racing Volkswagen, and Yann Ehrlacher in the Lynk & Co 03 TCR were the only drivers to improve when the session restarted and broke into the top five.

The two KCMG Hondas made it into the top five for the first time this year, with the two Lynk & Cos of Yvan Muller and Yann Ehrlacher also making it through, along with Huff’s Volkswagen.

In the one-lap shootout, Rob Huff went out first and set a strong banker lap, but he was bettered by Yann Ehrlacher’s Lynk & Co when he went out next.

However, Monteiro was the first driver to set a sub two-minute lap in Q3 and took provisional pole, and while he was under threat from Yvan Muller, the Frenchman made a mistake in the final sector – with Attila Tassi last out.

The Hungarian however blitzed Monteiro’s lap in the first sector, and took pole by one-tenth of a second in his Honda, with Monteiro second and Ehrlacher third for this afternoon’s final race.