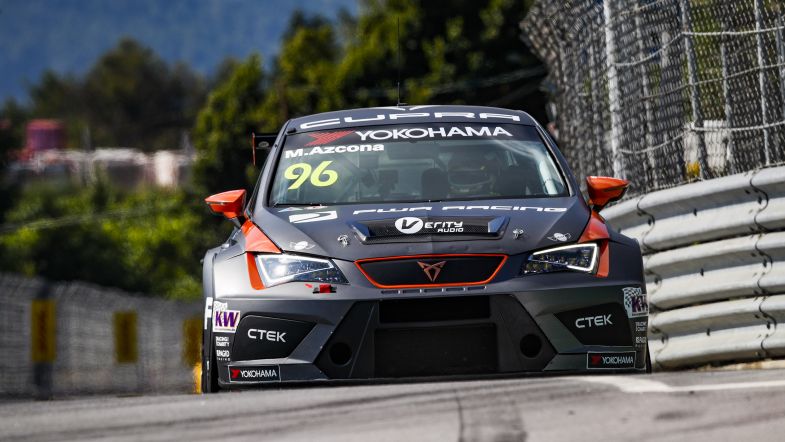 Mikel Azcona has taken his first win in the 2019 World Touring Car Cup, and the first for the PWR Racing team in the first race of the day at the Vila Real street circuit, making the most of the joker laps to leap ahead and win by almost five seconds.

Guerrieri was one of the first to take his joker lap, and the points leader fell behind the BRC Racing Hyundai i30 N TCR of Nicky Catsburg, but with Catsburg staying out late and slowing up Guerrieri, this allowed Azcona to get the jump on the Argentinian when he too his joker lap a lap later, and moved up to second.

Ma Qing Hua held out until lap seven to take his joker lap, but he made an error on the entry and jumped the kerbs, and lost critical time, falling behind Azcona’s PWR Racing Cupra.

Azcona continued to pull away, with Ma now safe in second as Nicky Catsburg waited until lap nine before taking his joker lap, when he dropped from third to fifth, with Guerrieri reclaiming third, with Jean-Karl Vernay moving up to fourth in the WRT Audi RS 3 LMS.

Yvan Muller finished sixth, the best-placed of the Lynk & Co drivers, having moved ahead of Rob Huff’s Volkswagen during the joker lap sequence, with Yann Ehrlacher’s Lynk & Co eighth, with the Hondas of Néstor Girolami and Tiago Monteiro completing the top ten.

Esteban Guerrieri extends his lead of the championship to 31 points ahead of Norbert Michelisz, with the Hungarian having an auspicious race, having been given a drive-through penalty for early contact with Kevin Ceccon’s Alfa Romeo, and eventually retired from the race.

The final race of the day, with Attila Tassi starting from pole position in the KCMG Honda Civic TCR, is due to start at 17:00 WEST (18:00 CEST).