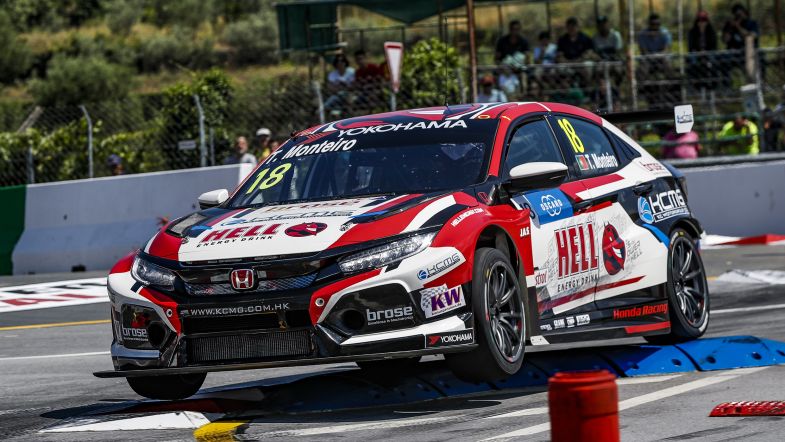 Tiago Monteiro has taken his first touring car victory in his home race at Vila Real in the final race of the weekend, holding off Yvan Muller’s Cyan Racing Lynk & Co 03 TCR to take the first win for the KCMG team.

The Portuguese driver made a strong start and followed his KCMG team-mate Attila Tassi through the first corner, with Cyan Racing’s Yann Ehrlacher in third ahead of Muller, with Jean-Karl Vernay in the WRT Audi jumping ahead of Rob Huff’s Sébastien Loeb Racing Volkswagen Golf GTI TCR.

Further back, there was race-ending contact between the BRC Racing Team Hyundai of Nicky Catsburg and the Münnich Honda of points leader Esteban Guerrieri, with the two cars making side-by-side contact and the safety car called for one lap as Catsburg’s car was recovered.

Before the end of the lap, Muller had passed his team-mate and nephew Ehrlacher for third before the closed on the safety car.

The race restarted on lap three, with Tassi suddenly slowing from the lead, with Monteiro and Muller straight past with the local crowd cheering on their home hero.

From then on, Muller challenged Monteiro for several laps, while Race 2 winner Mikel Azcona snuck up to third by opting to take his joker lap late, but as Muller began to fall back, Azcona served his joker and dropped one spot to Ehrlacher, but had effectively leapfrogged Vernay and Huff.

There was no stopping Monteiro out front, with the Portuguese driver taking his first World Touring Car win since the Hungaroring in 2017, before his terrible accident in Spain in August of that year.

Monteiro won the race by 2.3 seconds ahead of Muller, with Ehrlacher completing the podium.

Michelisz’s tenth place allowed the Hungarian to close to 25 points of points leader Guerrieri, heading into the summer break, with the next round at the Ningbo circuit in China on September 14th-15th.