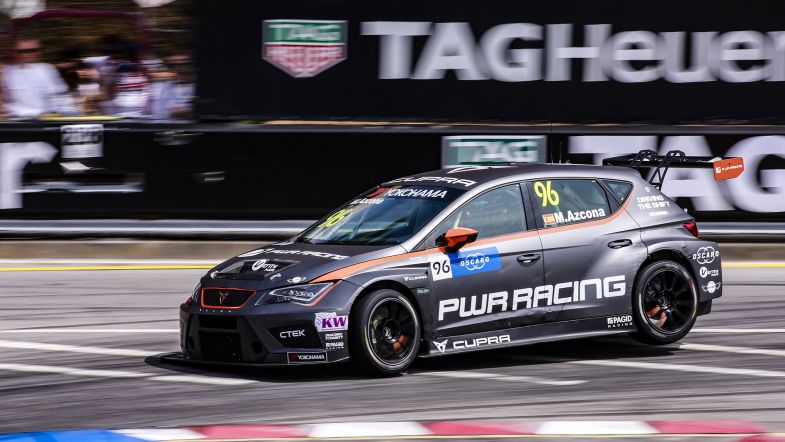 The World Touring Car Cup’s newest racing team PWR Racing has said it is proud as driver Mikel Azcona took his first victory, and cemented his position as the leading Volkswagen Group driver heading into the summer break.

The Spaniard sits fifth in the drivers’ standings after an ultra-competitive start to the season. Azcona won the second race at the Vila Real street circuit on Sunday, and cruised to fourth in Race 3, closing in on the top four in the championship, bouncing back after a tough weekend in Germany two weeks ago.

“It’s amazing to get our first victory in WTCR,” said team owner and driver Daniel Haglöf to TouringCarTimes.

“The speed was incredible, and we really turned it around from the first day. The guys and Mikel did an incredible job.

“We didn’t really expect this as a team at the beginning of the year. It’s really unbelievable; Mikel and I thought this would be a weekend to bring it good points after the lower compensation weight, but after the first day we looked at each other and thought no way. But step-by-step we learned a lot; this weekend, we got to show it, and I’m really happy.”

The team’s focus is to take advantage of the two month break to get ready for the final furlong of the season, after its last-minute entry into this year’s WTCR meant the whole programme was rushed, with the team signing on the dotted line right when then entry closed in January.

“After the Scandinavian round next weekend, we have a little break, and after that we have some more ideas,” said Haglöf.

“We didn’t really expect to be the strongest team from the Volkswagen Group in the championship, but now that we are there, we’d like to try and nibble at the Lynk & Cos and Hondas and Hyundais.

“We’ve learned a lot, but we know there are a few areas we can improve. We were quite close to the optimum on the Michelin tyres, but with the Yokohama tyres we know there’s still more we can get out of the car, we just need to do some more work to adapt.”