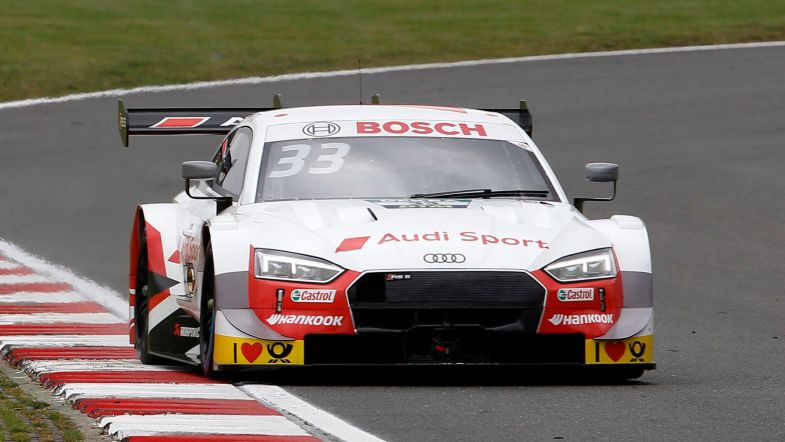 René Rast forgot to use the push-to-pass button

Audi Sport Team Rosberg driver René Rast still holds a comfortable lead in the championship after a day at Brands Hatch where he lost both the pole position and the victory to BMW’s Marco Wittmann by a narrow margin.

Rast held first position in the qualifying session until Wittmann pipped him by just 0.069 seconds with moments to go.

In the race, Rast was able to overtake Wittmann after they both had completed their pit stops, but the BMW driver regained the position as Rast battled with his team-mate Jamie Green.

Wittmann suffered high tyre degradation with a handful of laps to the end of the race, with Rast rapidly approaching the BMW driver. Still, Rast could only be second, three-tenths behind Wittmann.

“I probably was a bit too over-conservative with the tyres,” said Rast after the race. “From Assen I knew tyres were the key. At Assen I was a bit aggressive too early and this time maybe I was too late.”

“It’s always a fine line, this time it was a lap short, but I think we can be happy. We lost a bit of time to Marco around the pit stop and I’m sure this was a key moment for the race. Other than that, I’m happy with the race but we have to be careful with Marco,” added Rast.

Rast finished the race with his count of push-to-pass activations unused. Asked why didn’t he take advantage of the feature, the Audi driver said: “You know, sometimes I forget. Next time I won’t forget!”

The Team Rosberg driver leads the championship with 178 points, 27 ahead of fellow Audi driver Nico Müller and 32 over Wittmann.

In the manufacturers’ championship, Audi has extended their lead due to BMW’s engine woes, leading with 634 points, 225 ahead of BMW. Aston Martin is third with just 38.

“Obviously, we also wanted victory and in the end it was really close,” said Audi Motorsport boss Dieter Gass. “But for a race win everything has to fit and that wasn’t the case today.

“On the whole, we can be happy today. We continue to lead all three championships. That’s what we’re going to build on in order to strike back tomorrow.”