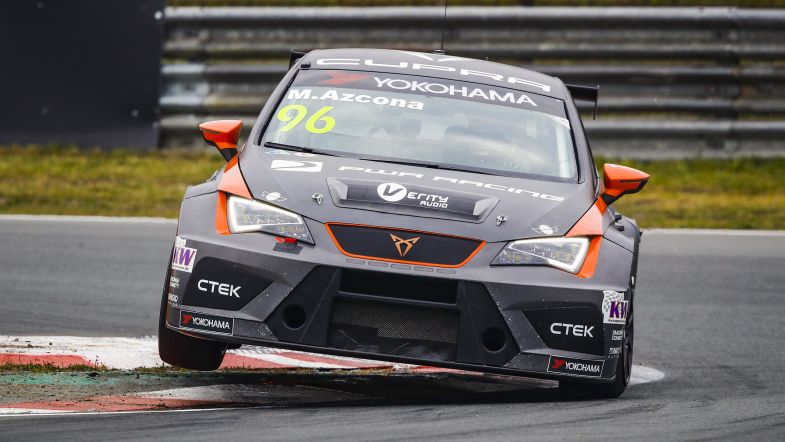 Mikel Azcona led the way in the final practice session at Ningbo in China, snatching the top spot by a comfortable margin on his final lap from Cupra rival Aurélien Panis, with local star Ma Qing Hua a comfortable third in his Alfa Romeo.

Frédéric Vervisch led the way throughout the early part of the session in his Comtoyou Racing Audi RS 3 LMS, with the Belgian setting a benchmark time of 1:51.748 on his first run.

Yann Ehrlacher ran into an issue early in the session, when the Frenchman’s Cyan Racing-run Lynk & Co 03 TCR developed a front-right puncture less than ten minutes in.

Ehrlacher was forced to slowly recover his car back to the pit lane, where the team discovered he’d broken his front anti-roll bar, but was able to get back out in the final ten minutes … and went on to be classified in 11th, nine-tenths of a second from the lead.

With just over ten minutes to go, Sébastien Loeb Racing’s Johan Kristoffersson then jumped to the fore in his Volkswagen Golf GTI TCR with a time of 1:51.420, with Cyan Racing’s Thed Björk slotting in just behind him, 15-thousandths of a second slower in his Lynk & Co 03 TCR.

As the session entered its final ten minutes, there were a flurry of improvements as cars evaluated their qualifying set-ups, with first BRC Racing Hyundai driver Norbert Michelisz going fastest, shortly improved on by the Comtoyou Racing Cupra of Aurélien Panis.

With just a minute to go, local driver Ma Qing Hua went fastest in his Team Mulsanne Alfa Romeo Giulietta TCR, again just a fraction ahead of Panis’ time, but Panis snatched the position back in his Cupra before Panis’ time was obliterated by the rival PWR Racing Cupra TCR of Mikel Azcona, with the Spaniard going four-tenths faster on his final lap.

Azcona, Panis and Ma completed the top three, while Norbert Michelisz was the best-placed of the championship front-runners in fourth ahead of Vervisch’s Audi, Néstor Girolami’s Honda, Kristoffersson’s Volkswagen, Guerrieri’s Honda and the two Lynk & Cos of Thed Björk and Andy Priaulx.