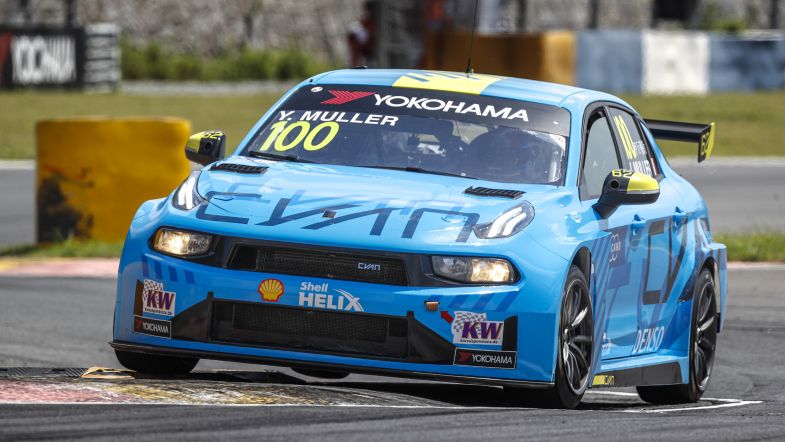 Yvan Muller clinches his first win of 2019, as the championship leader falters

Yvan Muller has claimed his first win of the 2019 World Touring Car Cup at Ningbo, leading from lights-to-flag in his Cyan Racing Lynk & Co 03 TCR. Muller held back local star Ma Qing Hua’s Alfa Romeo for the win, while the race was a disaster for points leader Esteban Guerrieri.

Guerrieri’s grid penalty from Portugal, which had dropped him to 12th from ninth in qualifying, was the least of his problems, when the Münnich Honda driver’s fire extinguisher went off on the grid, and he was forced to start from the pit lane.

Muller led the way into Turn 1 ahead of Ma and Mikel Azcona’s PWR Racing Cupra TCR, while Norbert Michelisz held fourth in his BRC Racing Hyundai, and was joined by team-mate Nicky Catsburg who had a good launch off the grid.

Ma made a lunge into Muller’s car at Turn 3, which allowed Azcona to get a run back at Ma at Turn 4, but all three held position.

Aurélien Panis was able to recover a spot from his sluggish start in his Comtoyou Racing Cupra, by passing Augusto Farfus’ Hyundai on lap two for sixth.

Reigning champion Gabriele Tarquini was in the pits early with damage to the rear of his Hyundai, as was Daniel Haglöf with heavy damage to the front of his Cupra TCR, with both drivers failing to finish the race.

Half-way through the race, and race leader Yvan Muller was calling out concern over tyre wear on his front-right, as he still fought hard to keep Ma’s car behind him.

Team orders were deployed at Lynk & Co with five laps to go, with Andy Priaulx pulling aside to allow both his Cyan Racing team-mates Thed Björk and Yann Ehrlacher through, even though this meant handing over 11th to Comtoyou Racing’s Frédéric Vervisch in the process.

On the final lap, Ma was as close as ever to the rear of Muller’s car but couldn’t find a way past, with Muller securing a key victory for the Lynk & Co manufacturer at home.

Azcona was under threat for third on the final lap, but the Spaniard held on and kept third ahead of Michelisz.

Catsburg finished a safe fifth, with Panis and Farfus behind him, while Johan Kristoffersson dropped to eighth from fifth on the grid but was the best-placed of the Volkswagens.

Niels Langeveld was the top Audi in ninth, while Rob Huff completed the top ten in his Sébastien Loeb Racing Volkswagen, after making up seven positions on the first lap alone.

With Guerrieri finishing out of the points in 19th, Michelisz now closes to nine points in the standings, with Azcona now up to third overall, 43 back, while Thed Björk and Yvan Muller are separated by just one point for fourth, with Björk 46 back and Muller 47.