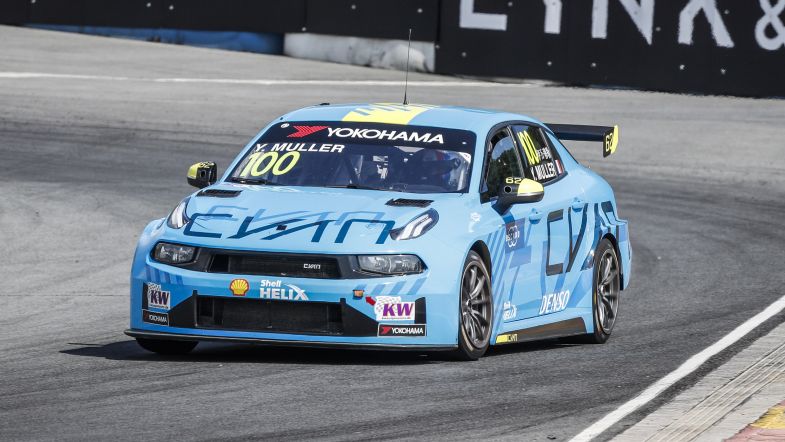 Yvan Muller has claimed pole position for Lynk & Co at the Chinese manufacturer’s home race, in a mixed qualifying session for the manufacturer, with none of their other cars making the top ten.

Muller outqualified local star Ma Qing Hua’s Alfa Romeo in a close qualifying session, with the top 21 cars all covered by a second around the Ningbo International Speedpark.

Muller, who missed out on pole position earlier in the year at Zandvoort after we was excluded due to an overboost, was five-hundredths of a second clear of Ma Qing Hua, setting his best time in the final ten minutes of the 30-minute session.

Behind Ma was Free Practice 2 star Mikel Azcona in the PWR Racing Cupra TCR, while Norbert Michelisz was fourth quickest in his BRC Racing Team Hyundai i30 N TCR.

Johan Kristoffersson made it five different manufacturers in the top five, with the Swede just 0.270 seconds from Muller’s time, while the Lukoil-backed Hyundais of Nicky Catsburg and Augusto Farfus sandwiched the Comtoyou Racing Cupra of Aurélien Panis in sixth and eighth.

Championship leader Esteban Guerrieri qualified ninth in his Münnich Motorsport Honda Civic TCR, but with a three-place grid penalty hanging over him from Portugal, this will drop him to 12th, behind the PWR Racing Cupra of Daniel Haglöf, the Comtoyou Racing Audi of Niels Langeveld, and the Cyan Racing Lynk & Co of Andy Priaulx.

Other drivers notably out of position include WRT Audi driver Jean-Karl Vernay, who qualified down in 22nd, and reigning champion Gabriele Tarquini, with his team-mates in the top three, Tarquini found himself languishing down in 23rd, 1.2 seconds from Muller’s lap time.