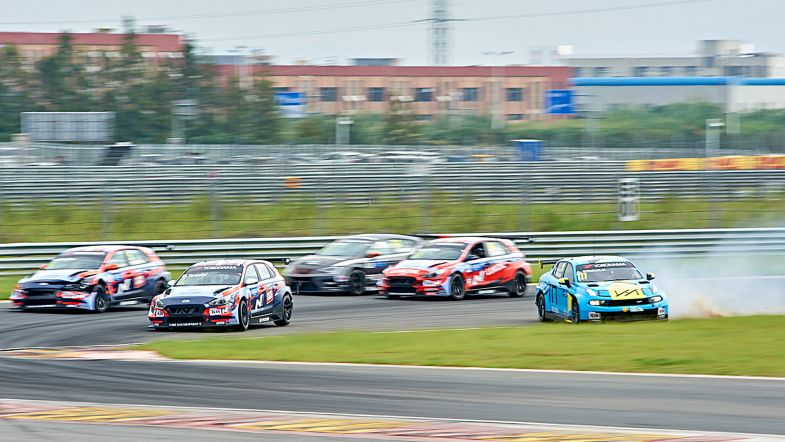 Andy Priaulx: “I don’t remember it being quite so stupid”

Lynk & Co’s Andy Priaulx has slammed the driving standards after the Guernsey driver was taken out of the lead of Race 2 at Ningbo in an incident with new championship leader Norbert Michelisz.

Priaulx had started from pole position in his 03 TCR, and was fighting to keep back a phalanx of Hyundai i30 N TCRs, with Michelisz, Gabriele Tarquini, and Nicky Catsburg hot on his tail.

The incident came to a head on lap 12, with Tarquini maximising on an opportunity to pass both drivers, while Michelisz slammed into the rear of Priaulx’s car, spinning him out into retirement.

In Race 3, Priaulx’s car was an early casualty again, also hit by Michelisz, but this time the Hungarian had help from behind from the Comtoyou Racing Audi of Frédéric Vervisch.

“At the moment, it’s crazy,” said Priaulx to TouringCarTimes.

“I’ve had so many races this year ended through contact. In that last race, after that contact, my car was fucked.

“I don’t remember it being quite so stupid,” he added. “They need to be very strict on the standards – they need to give instant drive-throughs for bad driving.”

Nicky Catsburg, driving for the Hyundai camp, had a similar opinion after a contact-heavy weekend for the Dutchman.

“I think the standards are getting a little bit out of control,” said Catsburg to TouringCarTimes.

“For example, in the WEC, when I just (lightly tap) a car, boom, drive-through penalty, and here you can pretty much do whatever you like. It should be like that to a certain degree, but today it was a little bit too much.”