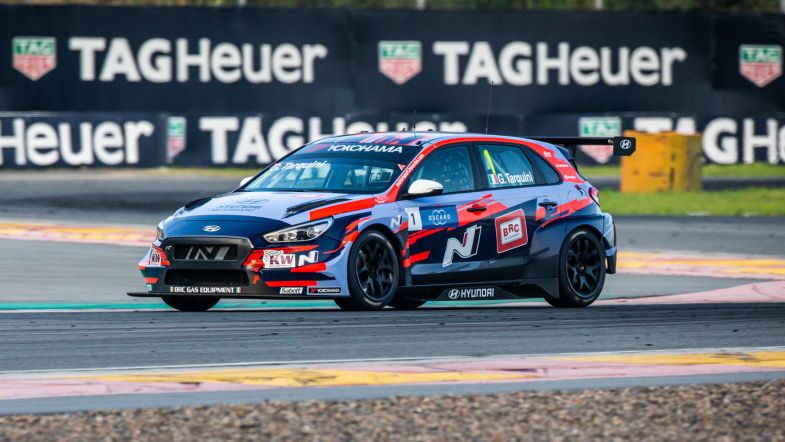 BRC Hyundai driver Gabriele Tarquini has hit out at the latest Balance of Performance adjustment for Lynk & Co, after the Cyan Racing team that run the cars had their best weekend of the season, with Yvan Muller taking two poles and two victories, and a podium in Race 2 in China.

Tarquini finished second and third in the two races on Sunday in his Hyundai i30 N TCR, but was unable to catch Yvan Muller and Yann Ehrlacher in Race 3, protesting that the TCR organisation’s BoP adjustment has been too much.

In a heated exchange in the press conference, Yvan Muller struck back at Tarquini’s protestation about the BoP change ahead of the weekend, which adjusted the boost curve for the manufacturer as well as the Volkswagen Group cars.

“That victory is deserved, is deserved by us, by our work,” said Muller. “It’s not a question of regulations or anything. I’ve been looking at the speed traps, and they were 7km/h faster over the weekend.”

Tarquini hit back at Muller’s defence, explaining that wasn’t the whole story.

“They are looking at top speed here, and the speed trap is on the braking point,” said Tarquini to TouringCarTimes.

“I know the Lynk & Co car is much faster on the straight as I was there. Every straight they disappeared, and they had nothing to risk – they were just cruising. I have nothing to risk either, so I was jumping on the kerbs and everything to try and catch them.

“I have nothing against Yvan or (Yann) Ehrlacher, but this is something I don’t like.

“You can’t change the cards on the table with three races to go, because the manufacturer of probably of what’s a “WTCC” car – because nobody knows this car – asks you to put the engine on the dyno and homologate another map.

“So far this year we’ve been more or less the same speed on the straight. I hope they only change this only for this race, because if the BoP stays like this, the championship is over.”

Cyan Racing took umbrage to the Hyundai driver’s comments over the weekend, with the team’s CEO responding:

“I am proud of everyone in the team that made this result possible,” said Christian Dahl.

“I am also proud over the sportsmanship of the team, remaining cool despite the tough fights on track.

“It is disappointing to see the lack of sporting manner and low driving standards from some of our competitors. This is a shame as I think that we have one of the best racing championships in the world with the WTCR.”