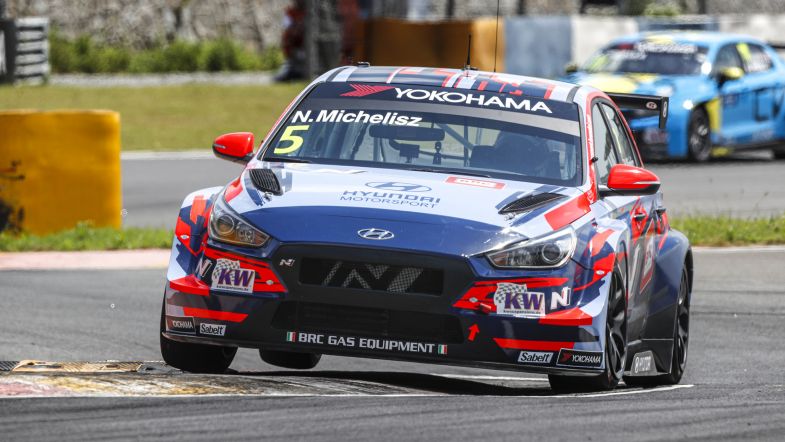 Norbert Michelisz has won a banzai second race at Ningbo, provisionally assuming the championship lead, but the Hungarian is under investigation for one of the many incidents in the race, after making contact with early race leader Andy Priaulx’s Lynk & Co.

Just 15 cars of the 26 made the finish, and almost all were sporting sizeable panel damage in one of the most bizarre races in recent history.

The first incident involved the SLR Volkswagen of Benjamin Leuchter and the KCMG Honda of Tiago Monteiro, both running into trouble with Leuchter’s Golf GTI TCR in the wall, and the Honda taking avoiding action across the grass and pitting for repairs.

Then up ahead, Mikel Azcona, who’d made a great launch from 16th, was battling with Yann Ehrlacher’s Lynk & Co, who in turn jinked towards Augusto Farfus’ Hyundai who took avoiding action. Behind was then points leader Esteban Guerrieri’s Münnich Honda, with the luckless Argentinian was spun around and forced to pit for repairs.

Ma Qing Hua’s race was soon over, in an unseen accident which saw the Chinese driver’s Alfa Romeo broken at the chicane, with the safety car called to pick up the stranded cars, which now included Augusto Farfus’ Hyundai.

Priaulx was now leading ahead of three Hyundais, with Björk down in fifth.

At the restart, Catsburg backed up Björk into his rival Swede Haglöf, with the tactic paying off with Haglöf passing Björk around the outside on lap seven, with Björk then letting team-mate Yvan Muller past into sixth.

Mikel Azcona, who had worked his way up to eighth from 16th on the grid, slowed and stopped on track.

Up front, Priaulx soon found himself fighting to hold back Michelisz, who had greater pace through the corners, while Priaulx was able to keep his 03 TCR ahead on the straights.

On lap 11, Priaulx was defending wildly to keep back Michelisz, which allowed Tarquini a run past the pair of them. Michelisz then ran into the back of Priaulx’s car, spinning him around and with terminal damage, which was also flagged for investigation, allowing Tarquini now up into the lead ahead of Michelisz and Catsburg.

Tarquini let his team-mate back through into the lead on lap 13, while a lap later, Catsburg was fighding to defend from Haglöf, with Catsburg taking damage and Haglöf losing two spots to Muller and Björk’s Lynk & Cos.

Michelisz went on to win the race by eight-tenths of a second, with Tarquini second and Muller third.

Björk was fourth ahead of Haglöf, while Attila Tassi rescued a result for Honda with sixth.

Rob Huff finished a credible seventh after starting 20th in his SLR Volkswagen, with Catsburg, the Comtoyou Racing Cupra of Tom Coronel, and the Alfa Romeo Giulietta Veloce TCR of Kevin Ceccon completing the top ten.