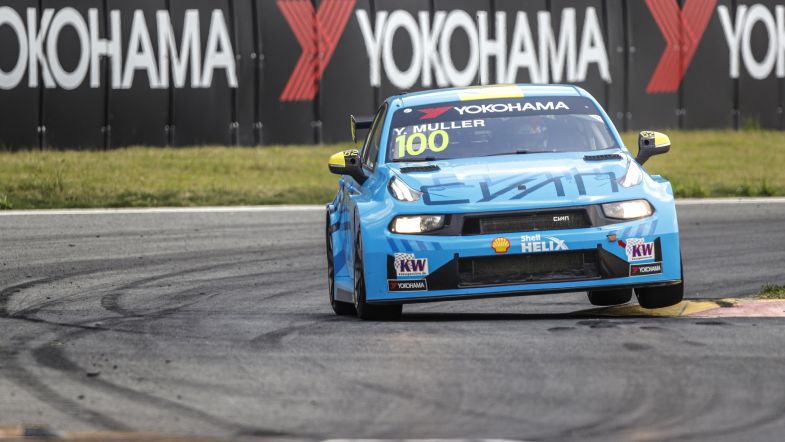 Yvan Muller has taken a second pole position in as many days at the Ningbo International Speedpark, this time leading his Cyan Racing team-mate and nephew Yann Ehrlacher, while there was trouble for local hero Ma Qing Hua in the second part of qualifying.

Muller set a near-perfect lap of 1:50.135 in the top-five shootout to claim pole position, and move into a clear third in the drivers’ championship with the five points that come with it.

Ehrlacher was just three-tenths adrift on his run, with Néstor Girolami qualifying his Münnich Motorsport Honda third, but the Argentinian is under investigation for an incident with Ma’s Alfa Romeo in Q2.

Aurélien Panis put on a sterling performance to qualify fourth in his Comtoyou Racing Cupra TCR, with Nicky Catsburg the top of the Hyundai drivers today, qualifying his i30 N TCR in fifth position.

The first part of qualifying was heavily disrupted by an extended full course yellow, after Kevin Ceccon’s Team Mulsanne Alfa Romeo Giulietta Veloce TCR stopped up one of the escape roads.

The time it took to recover the car took up around a third of the session, with just about half the field having had the opportunity to set a time at that point.

Despite light rain threatening at the end of the session, there was still grip for a wave of improvements at the flag.

Comtoyou Racing driver Frédéric Vervisch had made the top 12 cut, the only Audi driver to do so, but his last lap was deleted due to a track limits infringement, which put BRC Hyundai driver Gabriele Tarquini through in his place, with PWR Racing’s Daniel Haglöf missing the top 12 cut off for Q2 by just 0.002 seconds.

Team Mulsanne Alfa Romeo driver, Ma Qing Hua, who had set the new lap record of 1:49.980 in Q1, aborted his first run and headed to the pits for a new set of Yokohama tyres, but on his first timed run he came across Néstor Girolami’s Münnich Honda at the end of the lap, and with Girolami holding the racing line, Ma ran into his rear and spun out – causing the session to be red-flagged with no further improvements possible.

This meant Panis, the Hyundai of Nicky Catsburg, Girolami’s Honda and the two Cyan Racing Lynk & Co 03 TCRs of Yvan Muller and Yann Ehrlacher would progress to Q3, while points leader Esteban Guerrieri missed the cut courtesy of just having set the exact same time as Ehrlacher to the thousandth of a second, but a fraction later – relegating the Argentinian to sixth for Race 3 and fifth for Race 2.

All four Hyundais made the top ten, with Gabriele Tarquini set to line-up right behind Guerrieri for Race 3, with his BRC Hyundai team-mate Augusto Farfus right behind him on the grid.

Thed Björk qualified ninth in his Cyan Racing Lynk & Co, meaning the Swede will share the front row for the reversed grid Race 2 with the Hyundai of Norbert Michelisz who set the tenth fastest time before the red flag. Michelisz goes in to the race just nine points behind Guerrieri, and will start from pole for the second race which gets underway at 14:30 CST (08:30 CEST).