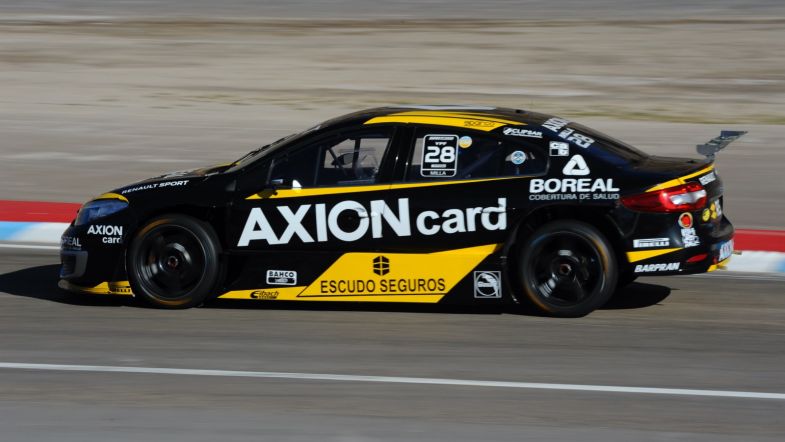 Agustín Canapino started on pole in his Chevrolet, followed by Mariano Werner of Fiat Racing. Canapino made a strong start but was unable to keep the pace with the top and dropped to fifth.

Milla moved up into third as his team-mate Leonel Pernía was involved in an incident with Llaver and dropped to last position.

Llaver was immediately given a drive-through penalty for the incident while Milla overtook Werner for second place. The other Renault of reigning champion Facundo Ardusso dropped back to 14th after the first lap carnage.

Rossi passed his team-mate for fourth and went on to fight Werner for third. Llaver did not take his penalty during the two laps he had the opportunity to do so and was black flagged at the same time as Milla battled fiercely with him for the lead.

Llaver finally went into the pits to retire after being black flagged, even making contact with Milla in the last turn before he entered pits. He stated after the race that he cut the chicane after being touched by Werner, despite the TV replay proving him wrong.

Milla was leading ahead of Werner on lap eight ahead of Rossi, Toyota’s Julián Santero and Citroén driver Facundo Chapur, who started from the back of the grid.

Both Rossi and Santero managed to overtake Werner and moved up to second and third respectively on lap 14. Milla then opened a ten-second gap over Rossi, while Canapino entered pits with what seemed to be an engine issues.

As the race was entering its final half, Santero was losing pace and had to pit. That allowed Chapur to move up to third after a strong start to the race from the back of the grid.

Werner lost another place to his team-mate Muñoz Marchesi for fourth on lap 29. Meanwhile, Rossi was reducing the gap to leading driver Milla from ten to eight seconds, lapping around two tenths faster than the Renault every lap. But it was not enough for him to launch a serious attack on the lead.

Milla celebrated his first victory in Super TC 2000 ahead of Rossi and Muñoz Marchesi on the podium. Altuna was fourth ahead of Chapur and Werner. Gagliardi Genné celebrated a career-best seventh ahead of Pernía, and the Honda duo of Ricardo Risatti and Juan Angel Rosso.

Rossi is the new series leader with 125 points and Pernía is second on 115 points while Ardusso remains in third on 90 points.

The next Super TC 2000 round will be held in Mendoza on October 5-6th.