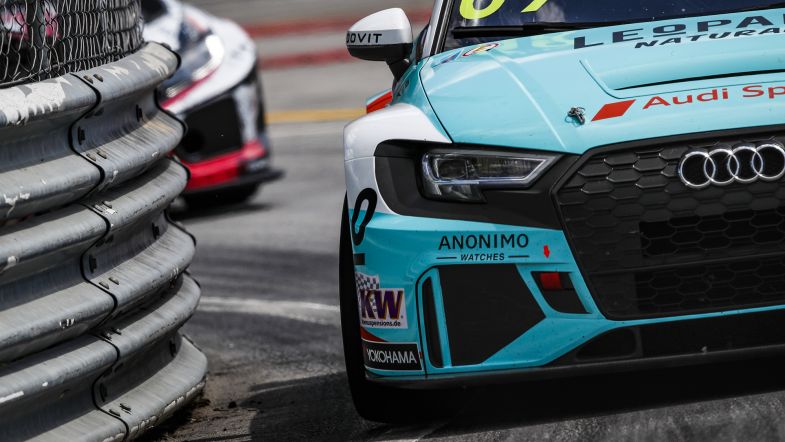 Comtoyou Racing and WRT have been reinstated into the results of the World Touring Car Cup races at Vila Real after the Audi teams made an appeal against exclusion to the FIA.

Jean-Karl Vernay and Frédéric Vervisch were excluded due to overboost on three separate occasions at Vila Real, and the exclusions from the races have been changed to suspended fines for the teams.

The FIA decision means that he moves up from twelfth to tenth position in the drivers’ championship.

The Audi teams argued that the production car ECU “is not designed to control the boost pressure in particular situations encountered in competition”.

The FIA concluded after reviewing the appeal that while the cars were found to have exceeded the boost, exclusion from the races was disproportionate.

52. In these cases, the Court finds that a disqualification of the cars would be clearly disproportionate and that the sanction imposed in the Decisions therefore needs to be mitigated, for the following reasons:
53. This is a first time offence for both Appellants.
54. As the present cases are about the breach of the sporting regulations and not of the technical regulations, the fact that the Appellants did not gain any sporting advantage from this breach – or at least the FIA failed to prove that any sporting advantage was gained – should also be considered.
55. Although the Court admits that the Appellants used the ECU at their own risk, it remains that all parties confirmed that the boost pressure could increase under adverse weather conditions – especially hot weather – and that those adverse weather conditions, namely external conditions which were beyond the Appellants’ control, caused the breach of the regulations.
56. Besides, it has been admitted at the hearing that the FIA would have admitted to amend the boost pressure limit or at least the intake temperature compensation as it did for other cars.

Another part of the investigation shows that the FIA measure boost pressure differently that what is stated in the TCR regulations.

41. The Panel acknowledges also that the FIA monitored the boost pressure by using equipment that processes and assesses the data at 1000hz, when TCR Technical Bulletin No. 4/2019 establishes the use of equipment that processes and assesses the data at 100hz.
42. It is the Panel’s perception that the FIA’s equipment has the ability to process and assess the data on a level of 1000hz, but also has the ability to provide the assessment of the data on a lower hz level, e.g. 100hz. This is why the FIA delivered the data to the Appellants on a 100hz basis.
43. The use of 1000hz to process the data is indeed not in accordance with the FIA Technical Regulations, namely Bulletin No. 4/2019 which states 100hz, but this ability does not have any negative impact on the establishment of the breach of the imposed boost pressure limit. While it would be expected that the FIA, which issues the regulations, would make sure that it updates those regulations if not before but at least at the same time as it updates its measurement tools, it remains that such a technical update was profitable to the Appellants as a 1000hz tool is more powerful and accurate than a 100hz tool. The Appellants cannot, therefore, take advantage of the fact that the regulations are in this respect outdated.

The court costs will be split between the two teams and the FIA, with the FIA taking 40% of the costs, WRT 40% and Comtoyou Racing 20%.