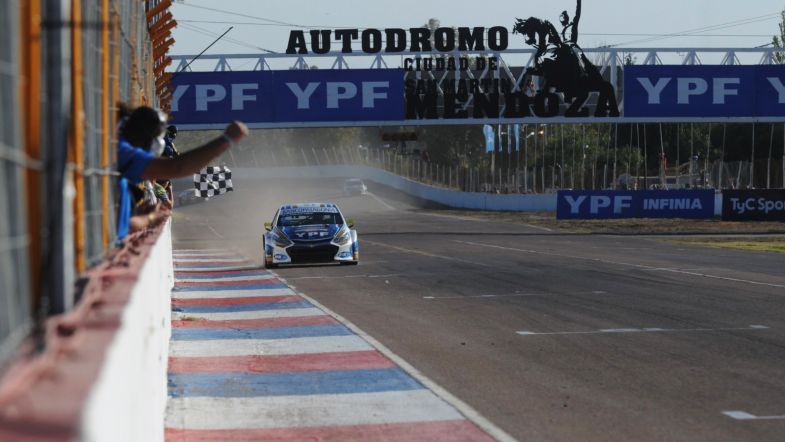 Agustín Canapino won the second Super TC 2000 race of the weekend at Mendoza, his second straight victory for team Chevrolet YPF. Just as in the first race, he headed a Chevrolet 1-2 with team-mate Bernardo Llaver finishing second and Fiat driver Mariano Werner third.

Canapino started from pole position and claimed the lead into Turn 1, followed by Llaver and Fiat Racing driver Werner.

Three laps later Matías Milla managed to pass them both, with Altuna following him past Ardusso who dropped to sixth.

Renault Sport driver Leonel Pernía made a move with contact on Toyota driver Matías Rossi for ninth position. But the stewards ordered Pernía to hand the position back to title rival Rossi due to the contact.

Meanwhile Ardusso managed to pass both Milla and Werner for third position on lap 15, lapping fastest of all drivers on the circuit.

Another lap into the race saw Pernía starting to drop back due to an engine temperature issue and lost ninth position to Toyota driver Julián Santero.

Disaster struck two drivers on lap 19 with Renault driver Ardusso having to pit with a punctured left rear tyre and Chevrolet driver Franco Girolami pitting due to an engine issue.

Renault Sport driver Milla crossed the line in fourth, with championship leader Rossi being let past Toyota team-mates Santero and Altuna to claim fifth position and secure vital points for the title battle.

Rossi heads the standings on 134 points with Pernía second on 120 points and Ardusso third on 98 points.

The next Super TC 2000 round takes place in Buenos Aires on November 9th.