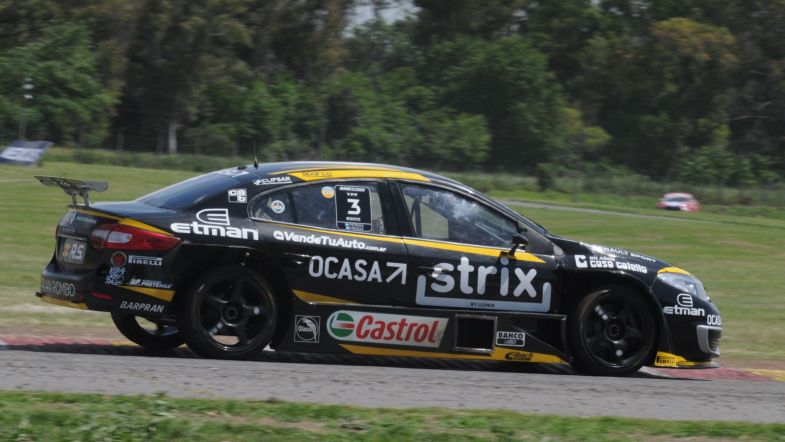 The 200km race required each driver to drive a minimum of 25 laps or a maximum of 35.

Pole sitter Gabriel Ponce de León, co-driver to Facundo Ardusso, stalled his Renault on the grid and was luckily avoided by the surrounding drivers, handing the lead to Pernía who started second.

José Manuel Urcera of Honda entered pits on lap one and retired from the race due to technical issues.

Title contender Rossi saw his factory-entered Toyota Corolla start from eight on the grid with Urrutia at the wheel, dropping back to 12th position after the first three laps.

WTCR front-runner Néstor Girolami started the race in Juan Angel Rosso’s factory Honda Civic from 12th place on the grid, moving up two places in the early part of the race.

Pernía opened up a gap of four seconds in the lead after the first ten laps, with Milla in second and Franco Girolami in third.

Ponce de León recovered from stalling on the grid and had moved up to 12th position on lap 12, overtaking Urrutia with some contact. Facundo Conta managed to pass Urrutia as well, also making contact in the process.

Pernía came into pits on lap 25, with Damián Fineschi taking the wheel as the team changed the front tyres only. Urrutia and Franco Girolami pitted on the same lap, handing their cars back to regular drivers Rossi and Canapino. The latter took longer to go back on track as the team removed grass from the radiator.

Vivian took over from Milla at the wheel of the #28 Renault Fluence on lap 27, with Néstor Girolami also pitting to hand the Honda Civic back to regular driver Rosso.

Lap 29 saw Ponce de León entering the pits to allow Ardusso take over his Renault. As all pit stops were completed, Pernía had an 8,3-second lead over Canapino who was chased by Vivian.

Uruguay driver Mauricio Lambiris had taken over the wheel from Werner in the factory-entered Fiat Tipo and was in fifth place. But Lambiris dropped back and had to pit again with a punctured tyre.

Canapino was forced to stop on lap 36 from third place and retired from the race due to an engine issue that activated the pit speed limiter. This allowed Toyota driver Emiliano Spataro to move up to third place.

Mariano Altuna made contact with Ricardo Risatti’s co-driver Martín Chialvo when trying to overtake him for ninth, but handed the position back. This saw the Toyota driver instead being overtaken by former junior Super TC 2000 champion Antonino García, co-driver of Chevrolet’s Tomás Gagliardi Genne, dropping him to tenth.

Rossi got into the slipstream on the main straight with just two laps left, making a late dive into Turn 1 to claim fourth position from the Renault Sport driver. Moments after this, third-placed Santero slowed down to allow Toyota team-mate Rossi past.

The 80-minute limit of the race was hit with 57 laps completed and Fineschi took the checkered flag to claim the win for regular driver Pernía. Milla with co-driver Vivian made it a Renault 1-2 while Rossi completed the podium to claim the points lead.

Santero/Spataro made it two Toyotas in the top four, followed by Ardusso/Ponce de León in a strong fifth position after stalling on the grid.

The Citroën duo of Ciarrocchi/Sapag, the Chevrolet duo of Bernardo Llaver/Lucas Colombo Russell and the Fiat duo of Matías Muñoz Marchesi/Juan Cruz Álvarez rounded off the top eight.

Rossi heads the drivers’ championship on 155 points, followed by Pernía on 150 and Ardusso on 117.