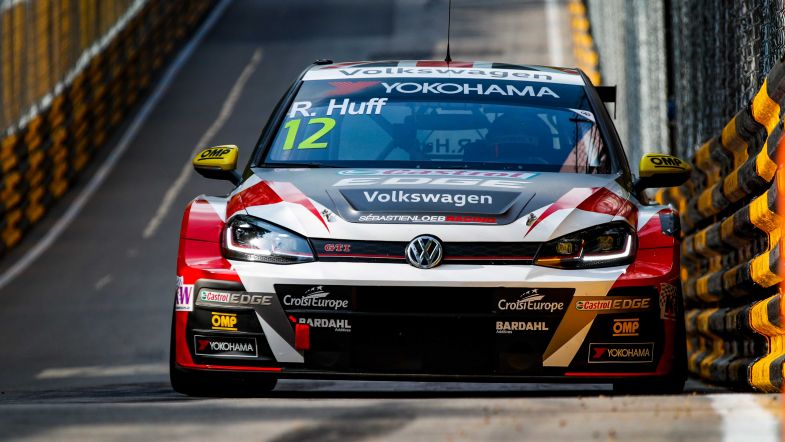 Huff was on electric form aboard his SLR Volkswagen Golf GTI TCR as the grids for races two and three of the WTCR weekend were decided, powering to his ninth career pole in the former Portuguese colony.

Huff, who was held back by damper issues in Qualifying 1 earlier on Friday, bounced back to set the pace in each of the three segments in Qualifying 2. He ultimately sealed pole for Sunday’s concluding race by defeating fellow Brit Andy Priaulx (Lynk & Co Cyan Racing) by two tenths on the solo Q3 laps.

There was plenty of action throughout qualifying, with the opening Q1 part coming to a dramatic conclusion when title contender Norbert Michelisz became the headline casualty in a late multi-car pile-up.

The accident occurred when Gordon Shedden went straight in at Moorish Hill, his Audi RS 3 LMS perilously blocking half the track on the exit of the blind crest.

Championship leader Esteban Guerrieri and Honda stablemate Tiago Monteiro just managed to nip past Shedden’s stranded car by the tiniest of margins, but Michelisz – the third car on the scene – was less fortunate.

The Hungarian, who sits just two points behind Guerrieri in the title race, slammed into the back of Shedden, bringing the session to a premature end while a traffic jam ensued behind.

Huff ended Q1 fastest from Hyundai’s Nicky Catsburg and Cyan Racing’s Yann Ehrlacher, while Michelisz recorded the fourth fastest time but was unable to proceed into Q2 due to the damage inflicted on his i30 N TCR.

In addition to the session-curtailing Shedden/Michelisz melee, Q1 featured a number of other incidents. First, Mikel Azcona understeered into the barriers at Lisboa early on, causing damage to the front left of his PWR Racing Cupra.

There was then a peculiar squabble involving Robert Dahlgren and Jim Ka To, who made contact on the run into Fishermen’s Bend. Wild card entrant Ka To appeared to cut back onto the racing line too soon after passing Dahlgren’s PWR Cupra on a flying lap, leaving the TCR Scandinavia series champion with some damage and taking Ka To out on the scene.

The red flags flew almost simultaneously with the Ka To/Dahlgren clash when Terence Tse crashed out at Police.

Benjamin Leuchter’s session also came to a violent end in Q1 when he made contact with the wall at Paiol, derailing his SLR Volkswagen’s suspension.

Once in Q2, Huff upped the ante in spectacular fashion, twice smashing the TCR lap record within a matter of minutes. Setting a soaring pace of 2:27.963 – the only lap ever recorded below 2:28 in the TCR era – Huff led the way by nearly half a second from Catsburg.

Crucially in the title battle, Guerrieri clung on to P10 in the closing stages of Q2 to secure himself reverse-grid pole for Race 2, lending some light to Honda’s cause on what has marked a difficult weekend for the marque so far.

While Huff could not quite repeat his record-breaking Q2 time on the final Q3 run, a 2:28.538 still proved enough to snatch pole despite the best efforts of Priaulx – the last driver to complete his timed lap.

Jean-Karl Vernay was third for Audi, with Catsburg fourth for Hyundai.

The surprise of qualifying was arguably Johan Kristoffersson, the Macau rookie impressively making the Q3 cut in fifth place. The double world rallycross champion went on to smash the barriers at Moorish Hill on his Q3 lap, however, leaving him a distant fifth.