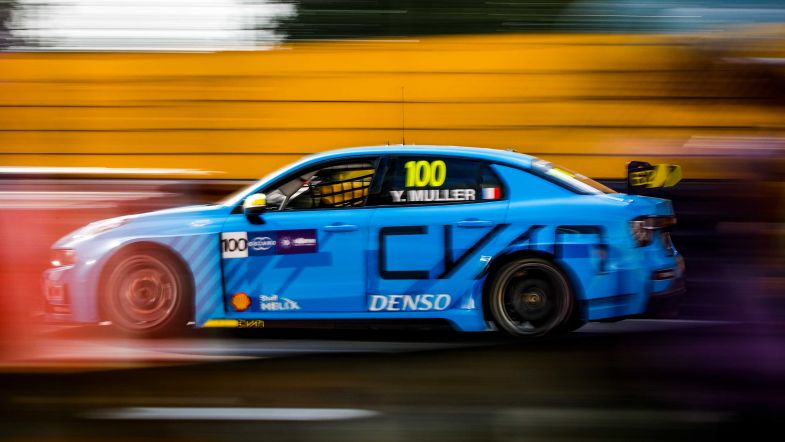 Yvan Muller controlled the first race of the World Touring Car Cup round at Macau, fending off new championship leader Norbert Michelisz for his third win of the 2019 season.

Muller maintained his lead from pole on the run to Lisboa, with positions remaining largely unchanged (Yann Ehrlacher moving past Kevin Ceccon for fourth one of the few exceptions) on an uncharacteristically composed opening lap.

Muller then kept second-placed Michelisz at bay throughout the remainder of the race, the French Lynk & Co driver going on to win by half a second from his Hyundai rival.

Michelisz’ second place moves him to the top of the WTCR standings, 18 points clear of Esteban Guerrieri, with Muller in third another 18 points adrift.

Guerrieri started from the back of the grid following an engine change on his Münnich Motorsport Honda, but made little progress in the race and eventually opted to pit for what appeared to be set-up exploration ahead of tomorrow’s two races. Guerrieri later rejoined and finished 24th, one lap down.

With Björk running three positions behind his team-mate, the move cost Priaulx both third, fourth and fifth place, as both Ceccon and SLR VW’s Rob Huff moved ahead in the process.

Priaulx duly finished sixth, ahead of the rapid Frédéric Vervisch who set the fastest lap of the race aboard his Audi RS 3 LMS as he powered from 11th on the grid to seventh.

While the start of the race was undramatic, there was contact on lap two when Mikel Azcona, Jean-Karl Vernay and Benjamin Leuchter went off at Lisboa – although all three were eventually able to continue.

Ma Qinghua and Niels Langeveld became two other casualties of the Lisboa run-off zone on lap six, both forced to retire.