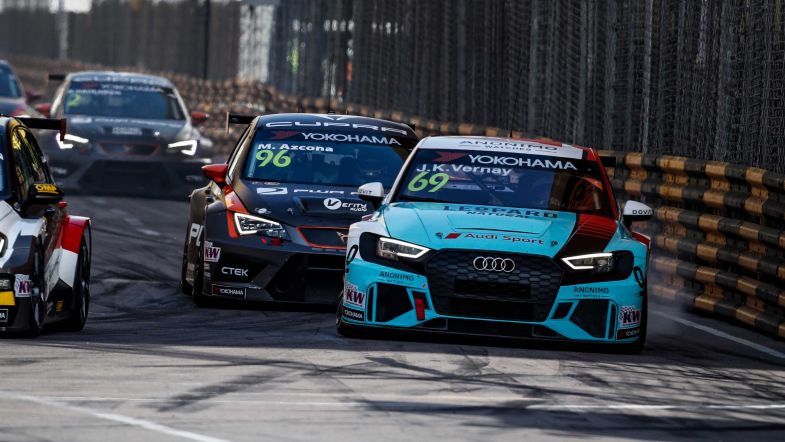 The WRT Audi team is fighting a battle against time to sort out an engine problem on Jean-Karl Vernay’s car that could significantly hamper his chances of battling for a podium in the concluding third World Touring Car Cup race of the Macau weekend.

Vernay, a WTCR race winner in Macau in 2018, is slated to start Race 3 from third on the grid when the lights go out for the weekend finale later this morning.

However, an injector problem manifested itself in the recently-completed Race 2, leaving Vernay with a straightline speed deficit along Macau’s extensive high-speed stretch.

Vernay finished Race 2 in ninth place and, with less than two hours between the end of that heat and Race 3, expressed his worries when speaking to TouringCarTimes once back in the paddock.

“We had an injector problem in the engine which meant I was losing speed and couldn’t overtake on the straight,” said Vernay. “Normally that’s where we are strong, but now I couldn’t do anything. It’s short of time but I’m pretty sure my team will fix it.”

Vernay explained that the issue had been particularly hurtful in right-hand corners, leaving him extra exposed through the critical R Bend sweep that leads back onto the long high-speed stretch down to Lisboa.

“When I go on the throttle the power is coming later, and especially the last two corners [are problematic], because they are right-handers and the way the engine works with the fuel mixing with the oil, that is the worst with this kind of problem.

We will try to fix it and for Race 3 the podium is the main target.”