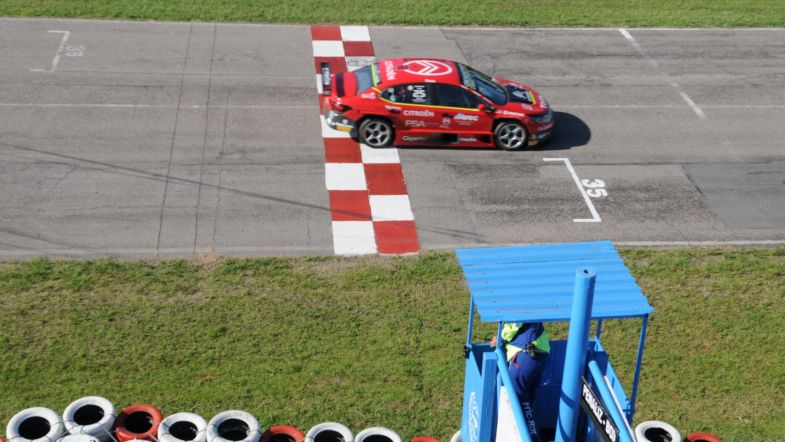 Marcelo Ciarrocchi claimed his and Citroën Racing’s first main race win of 2019 in the penultimate round of the season at Río Cuarto. He was joined on the podium by Leonel Pernía of Renault Sport who claimed the points lead.

Ciarrocchi headed the field from pole as the lights went to green, ahead of Altuna and Canapino, despite Pernía trying hard to move up to third. Tomás Gagliardi Genné of Chevrolet ran wide on the opening lap and dropped back to 20th and last position.

Pernía pulled off a strong move on Altuna on lap five, going past on the outside to move up to third. His Renault team-mate Facundo Ardusso took advantage of the move and jumped to fifth ahead of Rossi and Altuna, who dropped down to sixth.

The leading duo of Ciarrocchi and Canapino had opened up a gap of three seconds to the rest of the field after five laps.

Renault Sport’s Matías Milla was hit from behind by Fiat’s Mariano Werner while battling for eleventh and spun off on lap ten.

Entering the second half of the race, Canapino complained by pit radio that he was losing pace. And it was not long until Pernía overtook him for second, completing the move on lap 16 and went on to chase Ciarrocchi for the lead.

Ardusso caught Canapino and started attacking him for third at lap 19. Ciarrocchi was leading by 1.8 seconds over Pernía at this stage, followed by Ardusso, and Canapino.

Ciarrocchi took a lights-to-flag win in his home race ahead of Pernía and Ardusso. Canapino finished fourth in front of Rossi, Santero, Altuna and Conta.

Pernía has taken over the points lead from Rossi ahead of the last round of 2019, with just seven points separating the Renault and Toyota driver.

The Super TC 2000 season finale will be held in Centenario, Neuquén on December 14-15th.