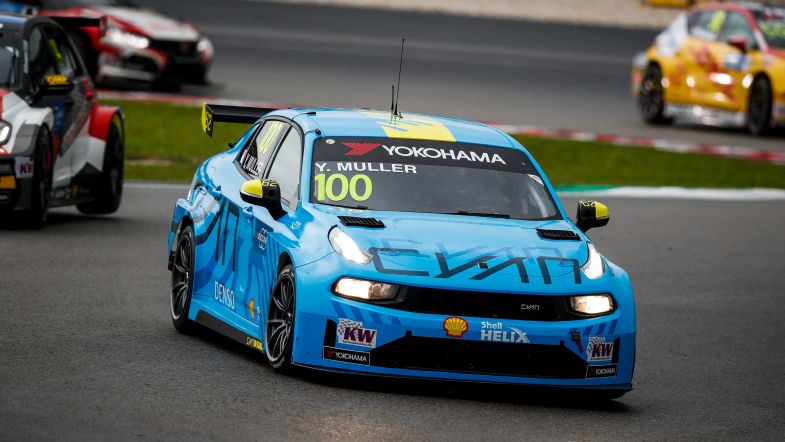 Yvan Muller has slammed Hyundai’s Nicky Catsburg after the two made contact on the first lap of a chaotic and currently suspended Race 2 of the Sepang World Touring Car Cup season-finale.

Catsburg careered into Muller’s Lynk & Co machine at the Turn 9 hairpin on the opening lap of a rain-drenched race, punting Muller into a spin.

Muller rejoined the track well down the order, but Catsburg’s car caught fire as he too tried to rejoin, causing the race to be stopped while further cars spun out behind amid a massive downpour.

Speaking about the clash on the official WTCR livestream, Muller was absolutely furious with Catsburg over what he felt was an intentional manoeuvre from one of title rival Norbert Michelisz’s Hyundai team-mates.

“Mr. Catsburg,” Muller began addressing the Dutchman. “Since three races he has tried everything to hit me and push me off. Here he tried for three corners, the last corner he saw he didn’t have any chance, and he just lifted off, over-braked purposely and crashed into me. Motorsport is a great sport, but a guy like this does not deserve to be in the championship.

“He came from nowhere. I was his target. I just hope for once there will be a very strong penalty like he should have, but probably it will be nothing.”

When informed about Muller’s furious accusations, a regretful Catsburg responded:

“I can imagine. I was on slick tyres in the front, I think he was on full wets so he had a lot more grip, but coming to the hairpin I just immediately locked the tyres. It was raining heavily there so I couldn’t stop the car, like half of the field. Yvan was in front of me and I completely T-boned him so that’s fully my mistake. I can only say I did not do it intentionally. I know it’s hard to believe for him and I understand his frustration.

“We took the gamble on the tyres like many other drivers and I took too much risk in the hairpin over there and took him out. My fault. Physically I am completely OK. The fire was outside and I got out fine, but mentally this is going to be tough. I will have to withstand all the comments from Yvan and I spoke to my old team boss right now and he was very angry. All I can say is it wasn’t on purpose and unfortunately that’s life.”

The incident between Muller and Catsburg is currently under investigation, while the race remains red-flagged nearly an hour after it was stopped. Darkness has now fallen over Sepang and the rain continues to pour down.

Championship contender Esteban Guerrieri was leading at the time of the stoppage, having sensationally snatched the lead from ninth on the grid. Points leader Norbert Michelisz, meanwhile, was among the plethora of drivers to go off in the Turn 9 hairpin melee, slipping well out of the points.