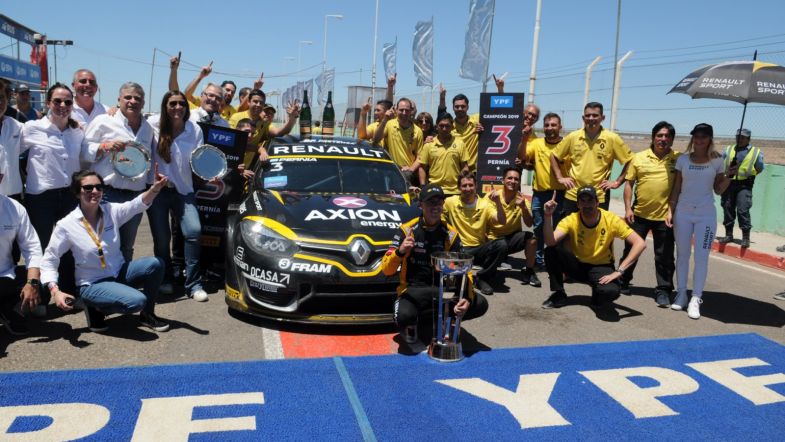 Pernía started from pole position, followed by Canapino, Facundo Ardusso of Renault and Santero. Title challenger and Toyota driver Matías Rossi started fourth and Pernía needed to finish in the top four to be champion, no matter Rossi’s finishing position.

Canapino took the lead at the start of the race followed by Pernía, Santero and Rossi. Rossi’s team-mate Santero was trying to catch Pernía during the opening laps, but was ordered to let Rossi go past on lap four.

Facundo Conta retired his Renault soon after, leaving 18 cars still in the race.

Pernía and Rossi were closely matched on lap times during the race, with just 0.1 seconds separating them after the first third of the race.

But Rossi was unable to challenge Pernía, who comfortably held second place behind Chevrolet’s Canapino.

Ardusso slowed down and stopped on lap 20 due to a radiator failure that caused the engine to overheat.

The start of lap 24 saw Santero overtaking Rossi, possibly as an attempt by the Toyota team to let him catch Pernía in the last part of the race.

But it was to no avail as Canapino won the race ahead of Pernía. Santeiro finished third, with Rossi in fourth position.