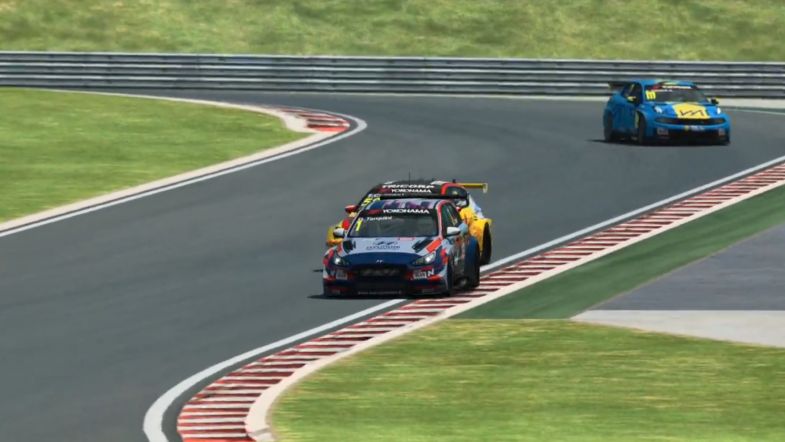 M1RA Esports team-mates Gergo Baldi (Hyundai) and Zoltan Csuti (Lynk & Co) shared the wins in the opening round of the Esports WTCR season at a virtual Hungaroring.

Blade withstood a ferocious attack from Moritz Löhner’s Williams Esports Cupra to come out on top in the first race, while Csuti and FA Racing Esports’ Alexander Dornieden profited from a late-race incident between Tim Heinemann and Nikodem Wisniewski to claim a Lynk & Co one-two.

Mat’o Homola ended the double header as the best of the real-world racers, claiming 18th in Race 1 and 19th in the second encounter.

Taking place on the RaceRoom platform, this was the first of a planned four-race mini championship, being beld as a precursor to the main Esports WTCR season later in the year.

The Hungarian made a decent start and survived an audacious move from Garcia at Turn 1 to maintain the lead from Löhner.

Löhner stayed with Baldi for the duration of the race, ducking out of the slipstream on various occasions but never quite finding the opportunity to get past.

The pair were never separated by more than a second, with Löhner’s best chance coming with two minutes left on the clock. The German got alongside Baldi as the pair approached the second corner, but Baldi just held the advantage on the apex to remain in charge.

Baldi then held off a last-lap charge from Löhner to take a narrow victory.

With the top ten finishers of the opening race reversed for the second, German GT4 real-racer Tim Heinemann lined up on pole position in his Volkswagen Golf GTI.

Heinemann led away off the line and fended off the attentions of Wisniewski into Turn 1.

Further back, Guerrieri, Engstler and Leonardo Werle were involved in a multi-car incident on the run between Turn 1 and 2.

Wisniewski spent much of the race hounding the back of Heinemann, who in turn defended admirably as Csuti and Dornieden also joined in a four-way battle for the lead.

Eventually, the fight came to a head with two laps remaining as Wisniewski nudged the back of Heinemann under braking for Turn 1, pushing Heinemann wide and forcing the German down to fourth.

Csuti, sensing an opportunity, pounced on Wisniewski and took the lead after a sensational move around the outside of Turn 4. Wisniewski, running wide as a result, also ceded second place to Dornieden and ultimately finished fifth after yet more contact with Heinemann who claimed the final spot on the podium.

Ehrlacher finished as the best real-racer in 17th, two places ahead of Homola, while Azcona came home 20th.

Ceccon, Monteiro, Michelisz and Engstler all made it to the finish, whilst Tassi was disqualified from both races after ignoring a drivethrough penalty.