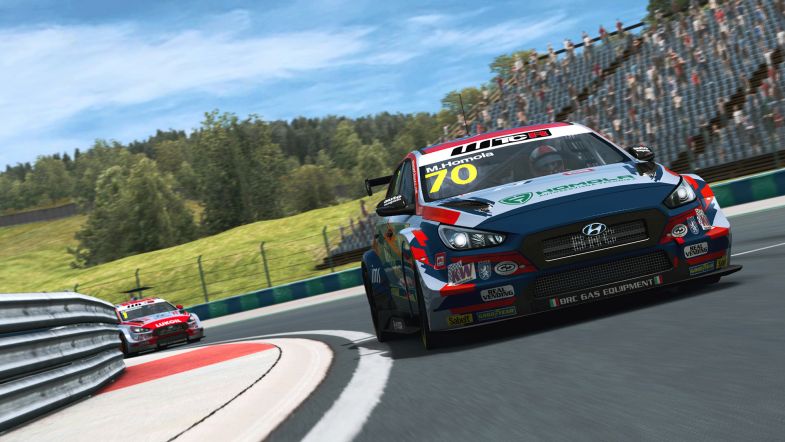 Hyundai driver Mat’o Homola and Honda driver Néstor Girolami claimed one victory each in the second Pre-season Esports WTCR Championship round at the virtual version of the Hungaroring.

Esteban Guerrieri had pole position for the first race but was hit by Cupra driver Mikel Azcona at the first corner, dropping them both down the order and handed the lead to Homola.

Michelisz was right on the rear bumper of the Slovakian driver but was unable to get past, having to settle for second place.

The Dutch driver was involved in a four-car fight for fourth position, with Azcona climbing back up to secure fifth ahead of Bence Boldisz in sixth.

Lynk & Co Cyan Racing driver Yann Ehrlacher fought for fourth with Langeveld, but made contact with the Audi driver to drop down to seventh position ahead of team-mate Andy Priaulx.

Aurelien Comte started the second race from the reversed grid pole position in his virtual Peugeot 308TCR and claimed the lead ahead of Honda driver Néstor Girolami.

The Argentinian driver managed to claim the lead from Comte before the end of the first lap, with Ehrlacher following past not long after.

The Lynk & Co driver then chased Girolami down, closely followed by Azcona.

And the Cupra driver made contact with Ehrlacher on the penultimate lap, sparking a furious six-car fight for the lead. Azcona was handed a five-point penalty for the incident after the race.

Girolami managed to escape to win the race ahead of Tassi and Azcona, with Ehrlacher in fourth and Boldisz in fifth.

Michelisz finished sixth ahead of Hyundai colleague and race one winner Homola in seventh.

Homola has taken over the points lead from Guerrieri by five points, with Michelisz in third, eight points from the lead. Azcona and Ehrlacher share fourth position on the same points, 19 points from Homola.

The next Pre-season Esports WTCR Championship race takes place at the virtual Slovakiaring on June 28th.