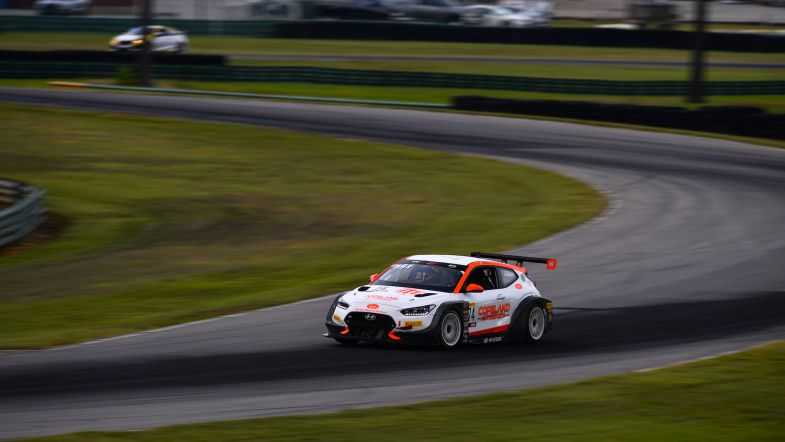 Tyler Maxson celebrated the return of the TC America series at Virginia International Raceway with a third successive victory to cement his position at the head of the championship standings.

The Copeland Motorsport driver had won both races at the Circuit of the Americas back in March before the COVID-19 pandemic led to the season being halted.

From pole, Maxson made the best start to lead into turn one, with Scott Smithson managing to get ahead of Victor Gonzalez through turn one; maintaining the position when the Puerto Rican then tried to fight back to reclaim the spot.

By the end of the opening lap, Maxson had already established a lead of well over two seconds with Gonzalez finding himself unable to challenge Smithson as his fellow Honda driver looked to try and edge away.

Before the second lap was completed however, the safety car was deployed after the TCA class Subaru of Ben Bettenhausen went off into the tyres.

Maxon led the field behind the safety car from Smithson and Gonzalez, with CJ Moses running fourth and Roy Block and Tristan Herbert rounding out the top six in the first of the DSG cars.

The action resumed on lap five with just under half an hour left on the clock, with Maxson once again maintaining his place at the head of the field, with the action coming behind as Block tried to go round the outside of Moses for fourth but instead got forced wide by Herbert and slipped back down the order to seventh as Luke Rumburg also found a way through.

Maxson quickly established a lead once again at the front with a series of fast laps, with Smithson wasting little time in dropping Gonzalez as the top three broke away from the battling back behind. Gonzalez however wasn’t planning to give up on second, and posted the fastest lap of the race on lap seven as he set about trying to reclaim the position – dipping below the 1:58s mark.

Smithson immediately responded and not only went quicker than Gonzalez on the following lap but also took three-tenths of a second out of Maxson ahead – giving the leader a warning that he couldn’t afford to relax.

Gonzalez was pushing hard behind but a small error saw him run wide onto the grass and drop away from Smithson, who continued to set lap times comparable with the leader. Further back Moses found himself dropping down the order after his strong start, with Herbert’s Audi climbing up into up into fourth and Moses plummeting down to eighth spot.

Despite the fact he had shown himself to be the quickest driver on track, another error from Gonzalez on lap eleven dropped him firmly out of contention for the race win, with Smithson continuing to keep Maxson honest at the front of the field.

Maxson’s team-mate Alex Papadopulos however saw his race halted whilst fighting for a top six finish when he was forced to bring the sister Veloster into the pits.

The key moment in the fight for the victory would come as the race entered the final ten minutes as the leaders started to encounter traffic, with Maxson getting through the backmarkers better than Smithson to suddenly extend his lead to more than four seconds at the end of lap 13.

Smithson would then lose more time on the following lap, with Maxson finding himself with breathing space at the head of the field. Smithson in turn then found himself comfortable in second when Gonzalez peeled off into the pits at the end of the 16th lap with a puncture on his Honda – promoting Herbert into third.

Out front, Maxson was able to ease his way to victory in his Hyundai, with Smithson taking a lonely second and Herbert holding onto third despite the best efforts of Rumburg in the closing laps.

Olivia Askew took seventh fifth after emerging on top of a heated battled with team-mate Moses, with the pair both getting ahead of Block’s Alfa Romeo after he ran into dramas on the final lap.

Vinnie Lima’s Audi was eighth in class and ninth overall behind the TC Class winner having suffered a mid-race trip off track, with Gonzalez down in ninth spot (13th overall) after his pitstop. The only plus for the Honda driver was that he set the fastest lap, which will give him pole for the second race of the weekend at 11:30 local time on Saturday.