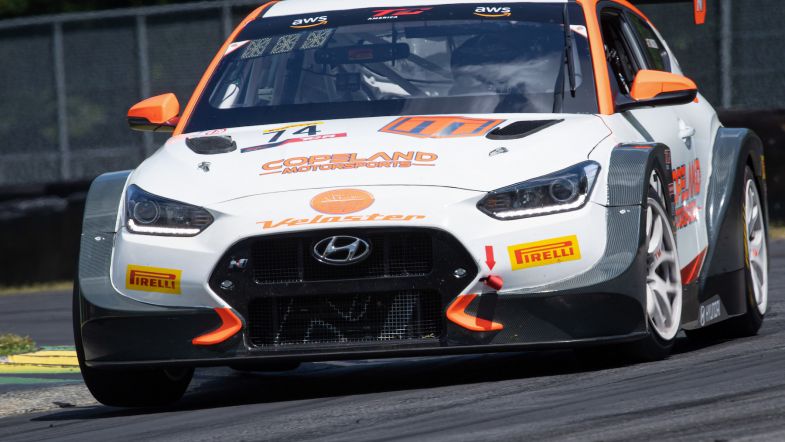 Tyler Maxson maintained his 100 per cent record in the TC America series with a fourth successive win in the second race of the weekend at Virginia International Raceway.

With the grid having been decided by the fastest laps set in race one, it was Victor Gonzalez who started from pole at the wheel of his Honda Civic Type R and the Puerton Rican held the lead through turn one as championship leader Maxson edged ahead of Scott Smithson into second.

Gonzalez wouldn’t be able to hold the lead for long however, with Maxson quickly making his move for P1 in the Copeland Motorsports Hyundai Veloster, and by the end of the opening lap, the teenager had already pulled out a lead of nearly two seconds.

Gonzalez then came under attack from Smithson at the start of lap two, with the pair briefly swapping positions through the opening corners before Gonzalez was able to hold onto the spot.

As Maxson stormed away at the front, Gonzalez and Smithson were embroiled in a frenetic battle for second spot, with Luke Rumburg and Roy Block also fighting hard over fourth, with Block getting his Alfa Romeo ahead with a late move at turn one at the start of the third lap.

Behind them, Alex Papadopulos and Olivia Askew were also enjoying their own fight for position, with Askew – who had slipped down the order from a second row start – getting ahead of the Hyundai on lap five to move into the top six.

The quick laps from the leader early on would be key when Maxson lost time to Gonzalez when he started to encounter traffic, with the gap between the two coming down to from more than four seconds to just 2.5s at the end of lap seven.

Gonzalez would then take a further two seconds out of Maxson on lap eight when the leader lost momentum navigating the backmarkers, whilst further back, Askew also lost out in traffic as Tristan Herbert’s Audi and Papadopulos were able to get ahead of her Honda.

After two laps where the traffic worked in his favour, Gonzalez then saw his hard work in drawing Maxson in be undone as the race approached the half-way point when he caught a gaggle of TCA cars at the wrong time and dropped nearly two seconds – giving Maxson breathing space again out front.

After his strong run in the early laps, Smithson had also been affected badly by traffic and dropped away from Gonzalez, which allowed Block to start closing in on the podium places.

Block in turn was edging away from the battling pack behind; now headed by Herbert’s Audi after he made a move stick on Rumburg’s Volkswagen to become best of the DSG cars.

As the race approached the final ten minutes, Gonzalez was able to close back to within six tenths of a second of Maxson in traffic when a full course caution was called after the TC class BMW of Chandler Hull went off heavily into the tyres at the Snake.

As the field circulated behind the safety car, track officials set to work repairing damage to the tyre wall but as the clock ticked down to towards zero, the decision was taken to put out the chequered flag before the action was able to resume.

It meant Maxson maintained his 100 per cent record this season with a fourth successive win, with Gonzalez bouncing back from his puncture in race one to secure second and Smithson rounding out the podium – leaving Maxson 51 points clear of Smithson in the standings.

Block was fourth in the Alfa Romeo ahead of Herbert and Rumburg, with Askew, CJ Moses and Vinnie Lima rounding out the top nine.

Papadopulos was tenth in class and 19th overall having been forced to make an unscheduled stop in the second Hyundai.

The third race of the weekend will take place at 11:20 local time on Sunday.