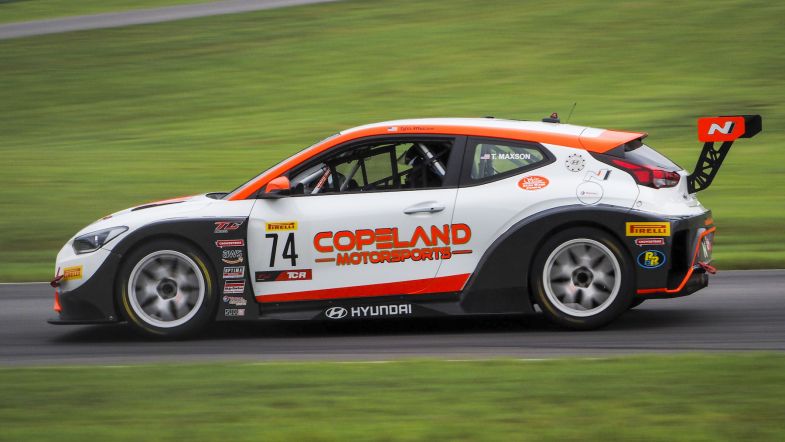 Tyler Maxson made it five wins from five starts with victory in the final race of the weekend at Virginia International Raceway to strengthen his hold on top spot in the TC America standings.

With the final race of the weekend being held to replace one of the races cancelled at Lime Rock Park, a seven car field took the start without the three DSG cars that had joined the grid this weekend, with Maxson making the perfect start to get the jump on the pack behind.

The teenager held the lead with ease into turn one, with Victor Gonzalez making a move up the inside of Scott Smithson to edge ahead of his fellow Honda into second, and Roy Block making a similar move on Olivia Askew to steal fourth.

By the end of lap one, Maxson had established a lead of more than two seconds over Gonzalez as he set building a lead over the pack behind and then went a further second quicker on lap two – no doubt aware of the fact that traffic had caused him to lose a large lead whilst heading Saturday’s second race.

Maxson’s lead would hit nearly five seconds as the race entered the final half hour, but it was a much closer battle behind for second, with Gonzalez unable to shake off Smithson as the two Honda drivers continued the battle that they had enjoyed in the earlier two races.

Smithson closed to within half a second of his rival but then lost time in the final sector of lap seven which allowed Gonzalez a little bit of breathing space. Further back, after a quiet opening to the race, Alex Papadopulos was able to get ahead of Olivia Askew to put the second Copeland Hyundai into fifth spot.

Askew would then lose more time on the following lap to slip behind CJ Moses to the rear of the TCR field.

Traffic would prove to be less of an issue than it had been in the earlier two races as Maxson was able to maintain his lead over Gonzalez before the race went under caution with less than 15 minutes to go after TCA class Hyundai of Caleb Bacon went off at high speed at turn one with an apparent brake failure.

With extensive damage to the tyre wall, the field circulated behind the safety car as repairs were carried out in a bid to get the race back underway, but it would ultimately prove to be impossible with the chequered flag being thrown to end the race slightly early.

It meant a win for Maxson that maintained his 100 per cent record, with Gonzalez and Smithson rounding out the podium.

Block took fourth in the Alfa Romeo from Papadopulos, with Moses and Askew rounding out the field.

The series now heads to Sonoma for another triple header event on the weekend of 7-9 August, with Maxson holding a lead of 61 points over Smithson in the standings and Gonzalez ten points further back.