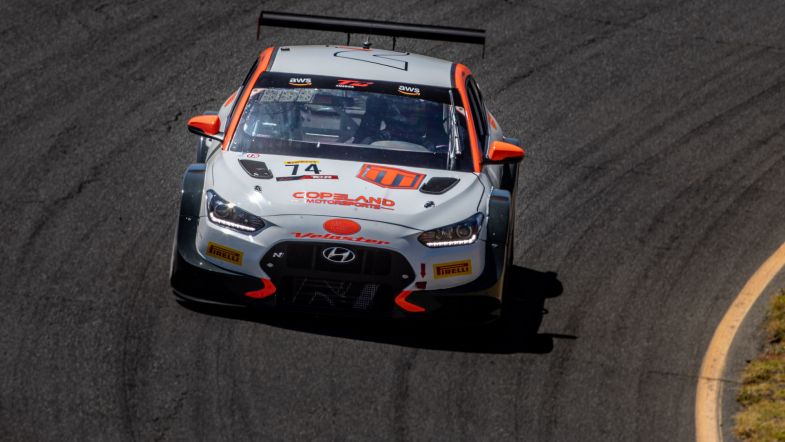 Tyler Maxon maintained his impressive run of form in TCR America with three wins from three at Sonoma Raceway – allowing him to remain unbeaten in the truncated 2020 season.

Qualifying on Friday afternoon had seen Maxson’s run of pole positions brought to an end as Victor Gonzalez secured pole position in his Honda Civic Type R ahead of the championship leader, with the pair split by less than a tenth of a second.

Roy Block was close behind to take third in the KMW Motorsports Alfa Romeo Giulietta, with the sole DXDT Racing Honda of CJ Moses back in fourth.

Post-session, Maxson would be stripped of his qualifying times due to a technical infringement on the Copeland Motorsports Hyundai Veloster N TCR – giving Gonzalez a chance to try and break away when the lights went out in search of victory for the second successive season.

Whilst the Puerto Rican was able to stay out front through the opening lap, Maxson wasted little time in clearly Block and Moses on the opening lap and then got ahead of Gonzalez on lap two.

From there, the teenager was able to ease away at the front and even when encountering traffic, was able to control the gap to his rival behind to secure victory by just shy of three seconds. Block would round out the podium, albeit more than 46 seconds off the lead, with Moses crossing the line in fourth.

Starting from pole for the second race of the weekend, Maxson came under pressure from a fast-starting Block when the lights went out for the start but was able to hold his advantage as the field headed through the opening corners.

The teenager was then able to start pulling away from the Alfa Romeo behind as Block found himself forced to defend to try and keep Gonzalez’s Honda at bay, with the pair quickly dropping Moses as he circulated in a lonely fourth spot.

As Maxson pulled away at the front, Block seemed set to secure his best result of the season to date but there would be heartache as the race entered the final 15 minutes when the Alfa started to slow with a sick-sounding engine. That allowed Gonzalez to sweep ahead into second place, with Block attempting to soldier on to bring the car to the finish.

Ultimately however, Block had no option but to retire to the pits, with Moses therefore securing third place on the podium behind Gonzalez and a dominant Maxson – who made it seven wins from seven starts to strengthen his championship lead.

Race three then resulted in another lights-to-flag win for Maxson as the teenager sprinted away from the battle for second between Block’s Alfa Romeo and Gonzalez’s Honda.

As in race two, Block would be forced to defend hard throughout the race but was able to avoid the technical issues that had forced him out of race two to secure the runner-up slot, with Gonzalez having to settle for third.

Moses would end up in a lonely fourth, with the series now heading for Road America at the end of the month for the next round.