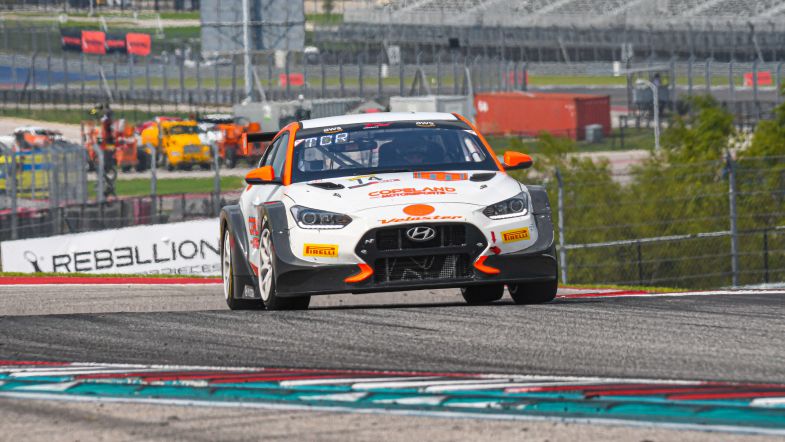 Teenager Tyler Maxson successfully wrapped up the TC America title with a double win in the penultimate meeting of the season at the Circuit of the Americas.

Having seen his winning run come to an at Road America last time out, Maxson bounced back to form in qualifying to put his Hyundai Veloster onto pole position ahead of the impressive Taylor Hagler on her series debut at the wheel of LA Honda World Racing’s Honda Civic Type R.

Roy Block was third quickest in the sole Alfa Romeo entered for the weekend ahead of double Road America winner Scott Smithson, with Victor Gonzalez down in fifth place and with work to do to keep his slim championship hopes alive.

Knowing that he could provisionally secure the title if the result was to go his way, Maxson was able to control the opening race from the front of the grid having held his place at the head of the pack when the lights went out.

Leading by more than two seconds at the end of the opening lap, Maxson was never in danger from the pack behind – even when he started to deal with lapping the slower TCA cars.

The fight for second spot however would run throughout the race, with Block managing to jump ahead of Hagler into turn one. Smithson would then find away ahead of the debutant on lap two and set about chasing down Block and wasted little time on closing in on the Alfa Romeo ahead.

Block would manage to keep his rival at bay as the pair ran through traffic, which allowed Hagler to make it a three way fight for second, and the Argentine driver would hold on until the final lap when Smithson finally got ahead.

Hagler also briefly managed to pass the Alfa Romeo only for Block to dive back inside at the end of the back straight, ensuring that he completed the podium behind Maxson and Smithson.

Hagler took the flag in fourth with Gonzalez never in contention for the podium places in fifth – meaning he dropped to 102 points behind Maxson with only 100 still to play for.

Olivia Askew and CJ Moses were sixth and seventh but well down on the top five having slipped back into the TC class cars at the start, with Askew also being tipped into a spin on the opening lap that left her to battle back through the field.

Having wrapped up the title in the opening race, Maxson suffered a scare before race two when the car refused to fire up as the field headed out for the start – although quick work from his team allowed the Hyundai to head out and start from the back of the TCR field.

Maxson wasted little time in moving up into second spot on the opening lap, helped by Smithson – who had inherited the defacto pole – suffering a spin going through turns six and seven that dropped him down the order.

That spin for the Honda driver left Block out front in the Alfa Romeo but when he got baulked by traffic, both Maxson and Askew were able to get ahead.

Maxson wasn’t headed from that point onwards as he secured another win to add to his tally, with Block battling back ahead of Askew into second and going on to retain the place through the flag.

Askew would slip back to the fifth place as she lost places to both Hagler and Gonzalez, with the latter securing the final place on the podium on the last lap.

Gonzalez would start the final race of the weekend from pole having set the fastest lap in race two, with Smithson – who recovered to fifth – alongside on the front row.

After an early caution period to allow Askew’s car to helped from the gravel after a spin, Gonzalez held the early lead but Smithson soon battled ahead into a lead that he would hold for the remainder of the race – going on to take his third win to close on Gonzalez in the fight for second in the standings.

The Puerto Rican could only manage third after Block battled his way ahead in the Alfa Romeo, and now heads Smithson by just seven points in the standings in battle for the runner-up slot.

Moses enjoyed his strongest run of the weekend to take fourth after a race long battle with Maxson, who would be classified in fifth despite a puncture on the final lap that saw him end up beached in the gravel at the start of the back straight.

With the final race of the weekend being run to replace one of those races lost earlier in the season due to the COVID-19 pandemic, Hagler didn’t take the start.