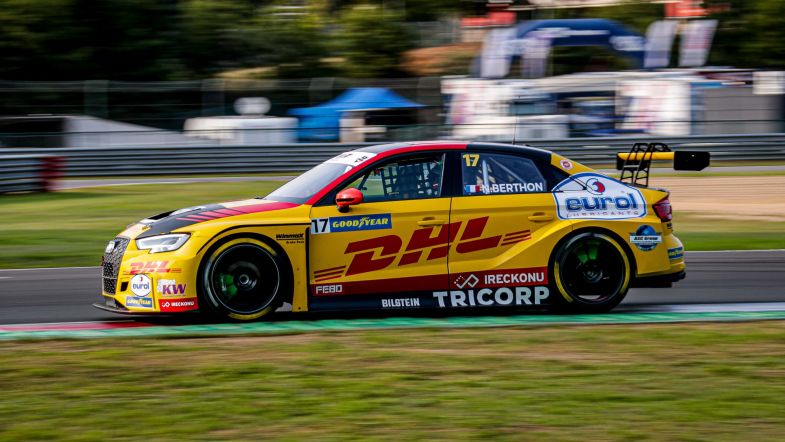 It’s Berthon’s first pole in WTCR, and comes at the home track for his team Comtoyou Racing, which has been on strong form all weekend with their trio of Audi RS 3 LMS cars.

The effort puts Berthon at the front of the grid for the second and final race of the weekend, while Honda’s Néstor Girolami will be on pole for the partially reversed-grid Race 1.

The Swedish team took a 1-2 in Q1 with Ehrlacher producing a last-gasp lap to P1 ahead of Thed Björk. That netted Ehrlacher five bonus points which, along with the four he later scored for P2 in Q3, hands him an early championship lead.

Hyundai’s lack of pace was the shock revelation of qualifying, with reigning champion Norbert Michelisz the only of its four drivers to even progress into Q2.

Michelisz just made the top 12 cut in 11th, eight tenths off the pace of the leading Lynk & Cos, while Nicky Catsburg, Gabriele Tarquini and Luca Engstler all failed to go through in 14th, 15th and 17th – Engstler’s cause not aided by having his final lap deleted for a track limits infringement.

Michelisz was then chanceless in Q2, going comfortably slowest. He will consequently start both of this weekend’s races in P12.

The Lynk & Cos went out immediately in the 10-minute Q2 and appeared to be dragging each other along around the track, initially occupying the top three positions until Magnus performed a stunning 1:35.480 lap at the death to steal P1.

Ehrlacher appeared on course to challenge the local sensation for top spot just moments later, however, but made a mistake into the final chicane and bailed out of his attempt.

Néstor Girolami was tenth in Q2, effectively handing Münnich Motorsport and Honda the first pole position of the season given the top ten reverse-grid rules in place for Race 1 of the weekend.

Crucially, Girolami’s performance came at the expense of Honda team-mate Esteban Guerrieri, who had to make do with the frustrating position of 11th.

After topping Q2, Magnus opted to head out first in the solo Q3 runs, setting the bar with a 1:35.527 lap he described as “near perfect in the second and third sectors” but which fell away slightly in Sector 1.

It remained enough to fend off the advances of Urrutia, who ran second, but Ehrlacher then put in a stormer of a lap to edge Magnus by just 0.01 of a second.

Yvan Muller fell away already in Turn 1 on his flying lap, running wide across the exit gravel trap, which made Berthon the final challenger for Race 2 pole.

The Frenchman duly delivered under the pressure, going 0.03 faster than Ehrlacher to steal away pole in front of his jubilant Comtoyou Racing crew.

The first race of the 2020 World Touring Car Cup gets underway at 10.30 CEST on Sunday.