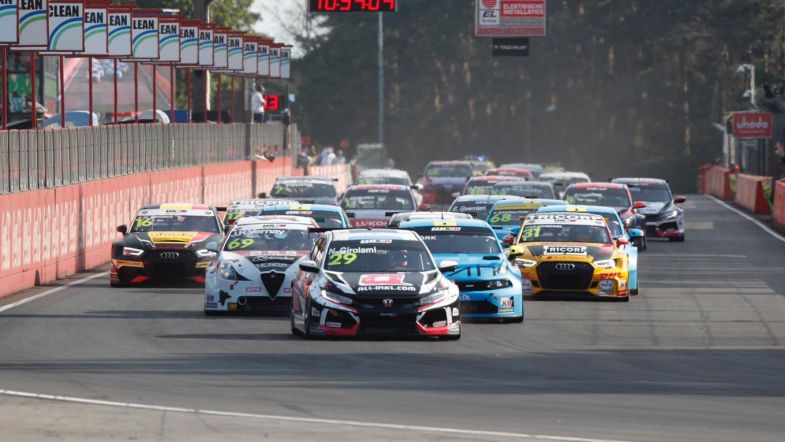 Néstor Girolami scored a lights-to-flag victory in the first race of the delayed 2020 World Touring Car Cup, giving Münnich Motorsport cause for celebration amid the simultaneous concern of two spectacular Honda engine failures.

Starting from pole on the partially-reversed grid thanks to taking tenth in qualifying, Girolami kept his lead into Turn 1 while Cyan Racing’s Thed Björk passed front-row starter Jean-Karl Vernay for second place.

Vernay had a bad first lap in his Team Mulsanne Alfa Romeo, also dropping behind Münnich’s Attila Tassi and the Comtoyou Racing Audi of Tom Coronel, with the top five remaining unaltered from that point onwards.

While the result netted Honda a victory for Girolami and a further podium with Tassi, there were literal clouds of worry for the Japanese cars as well.

2019 WTCR runner-up Esteban Guerrieri became the first retirement on lap three of 13, suffering a spectacular engine blow-out on the back straight.

Guerrieri was later followed out of the race by team-mate Tiago Monteiro, who dropped out of the points in a similar eruption of smoke on the start/finish straight at the end of lap seven.

The Honda drivers’ departures elevated reigning champion Norbert Michelisz to 11th, as Hyundai continued to run off the pace at Zolder.

BRC’s Michelisz and Engstler Motorsports’ Luca Engstler spent the race fighting an internal battle on the fringes of the top ten, struggling to break free from the chasing Vuković Renault of wild card rookie Dylan O’Keeffe, who eventually came home a solid 13th on his world touring car debut.

The remaining two Hyundais of Nicky Catsburg and Gabriele Tarquini only just made it into the points-paying positions in 14th and 15th after working hard to get past O’Keeffe’s team-mate Jack Young.

Young and Tarquini made contact late in the race, causing Young to retire with damage.