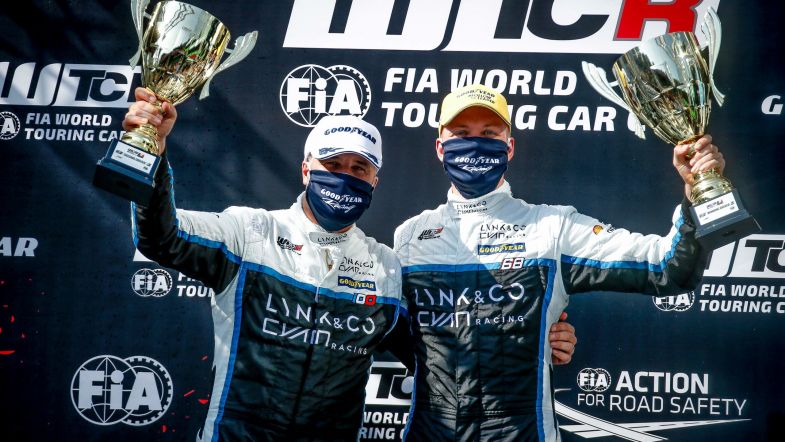 Yvan Muller says finishing in second place behind nephew Yann Ehrlacher at the WTCR opener at Zolder feels “like a victory”.

Muller came home in the middle of a Cyan Racing 1-2-3 in the final race of the weekend in Belgium, taking the chequered flag behind Ehrlacher and in front of the Swedish squad’s new signing Santiago Urrutia.

Muller, 51, has been instrumental in the touring car rise of 24-year-old Ehrlacher, the son of his sister Cathy, and the duo became team-mates in Cyan Racing’s Lynk & Co programme last season.

They have finished 1-2 once before, in Ningbo last year, but on that occasion it was Muller ahead of Ehrlacher. Today at Zolder, the order had shifted, but Muller was equally overjoyed with the result.

“This second place is like a victory for me,” said Muller. “It’s quite fantastic to share the podium with Yann, and with Santiago in our first 1-2-3. We still have some work to do on the race pace, but this is a really good start to the season.”

Ehrlacher took the lead of the race when pole-sitter Nathanaël Berthon picked up a drive-through penalty for a false start, and went on to claim his first win in Cyan Racing colours. He now leads the WTCR standings following the first round of the condensed 2020 campaign.

“I’m just so happy to claim my first victory for the team and to lead the championship,” said the Frenchman. “We just did a better job than the others this weekend. The getaway was not bad at the start, a bit messy the first two-three corners, and then I just benefitted from the penalty and I had a really strong pace. It’s fantastic to give the team this result after all of their hard work ahead of the season.”

Ehrlacher leads Honda’s Néstor Girolami at the top of the WTCR standings, with Muller in third.