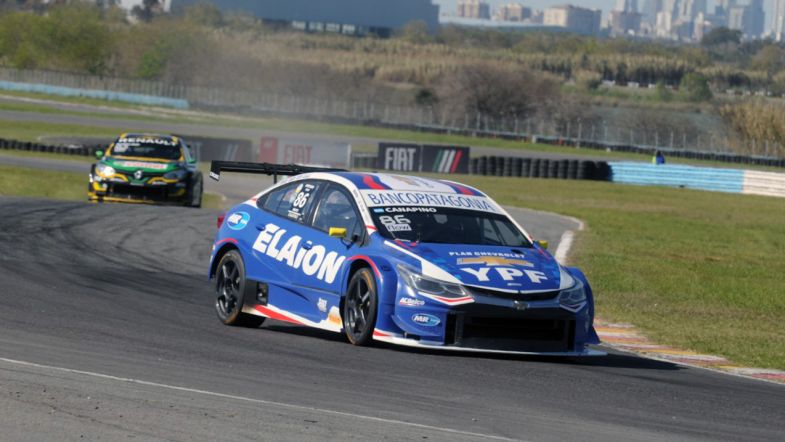 Rossi started from pole ahead of Canapino, but the Toyota driver struggled for grip and lost the lead to the Chevrolet driver heading into turn one.

Nicolás Moscardini of Honda Racing retired from fourth position in the opening stages of the race due to a throttle issue.

Former F1 driver Rubens Barrichello of Toyota Gazoo Racing Argentina started 18th and had made his way up to eleventh as the field started lap eleven and set his sights on Juan Manuel Silva who occupied tenth place.

Muñoz Marchesi dropped from ninth to eleventh after being overtaken by Silva and Barrichello by mid-point of the race.

Pernía started to lose places as the race neared the end and retired from sixth position due to a hydraulics issue, a fate shared by Renault team-mate Matías Milla.

Series newcomer Valentín Aguirre drove a solid first race, climbing from 13th on the grid to seventh. But a puncture unfortunately meant that he dropped down to finish last.

The fight for the lead went right until the chequered flag as Rossi piled the pressure on Canapino for the last two laps.

The Toyota driver went on the outside of Canapino at the Horquilla corner on the last lap, with just one tenth separating them over the finishing line in favour of Chevrolet driver Canapino.

Santero completed the podium, Ardusso was fourth ahead of Risatti and Llaver. Silva and Barrichello rounded off the top eight.

Canapino has taken the lead of the championship, two points ahead of Rossi.

The Super TC2000 teams will remain at the Buenos Aires circuit for the second race of the season next weekend.