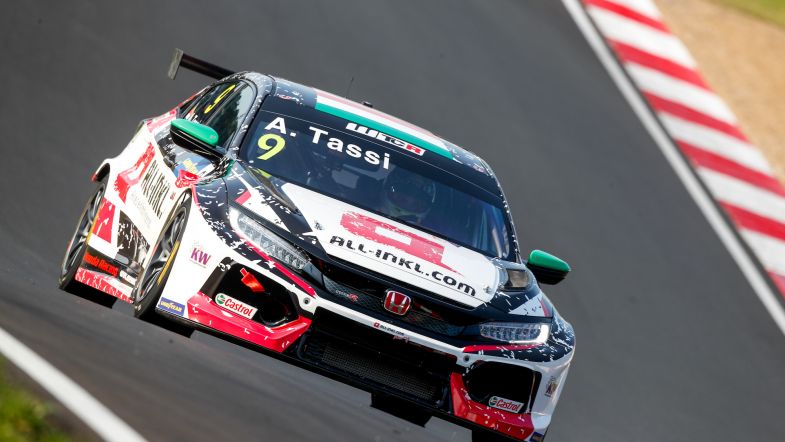 Attila Tassi remained the man to beat in the second half hour practice session at the Nürburgring ahead of the second round of the World Touring Car Cup season.

After the short break from FP1, 15 of the 16 cars went straight out when the session went green, with the only exception being Jack Young’s Renault after his trip into the gravel in the closing moments of the first session.

It wouldn’t take long before the first notable incident of the weekend however, with Santiago Urrutia clattering into the barriers at Aremberg as he tried to regain control of his Lynk & Co after the rear stepped out going through Schwedenkreuz.

Gilles Magnus was able to post the first quick lap of the session in his Audi as he put in a time of 8:56.710 on his first run, and would be the only driver to break the nine minute barrier in the opening twenty minutes as most of the field had to contend with a slow zone put in place to allow Urrutia’s car to be removed from the gravel.

Once that yellow flag was removed, Jean-Karl Vernay moved up into second spot in the sole Team Mulsanne Alfa Romeo as he too went under the nine minute mark, with the final few minutes of the session looking set for a flurry of quick laps as drivers looked to post a quick time.

Thed Björk, who had been outside the top ten in FP1, posted his quickest lap of the weekend to date to move into top spot before Tassi – having topped the first session – once again dipped under the qualifying lap record in the Honda to go fastest.

Yvan Muller was the first of the quick runners to take the chequered flag in his Lynk & Co but was more than a second off Tassi’s pace.

No-one else would be able to get close to the quickest time however when Esteban Guerrieri came to a halt on the Döttinger Höhe, bringing out a yellow flag that forced drivers to ease off in the final sector.

Amongst those to lose out would be Yann Ehrlacher, who had gone quickest of all in sector three and sector four before being forced to slow.

Further down the order, Tom Coronel went off into the gravel at turn one having suffered what he believed to be an issue with either the driveshaft or the gearbox on his Audi, whilst a tough day for series rookie Bence Boldizs continued as he was black flagged for noise levels on his Zengő Motorsport- run Cupra Leon Competición.

Young would join Urrutia in failing to set a time.