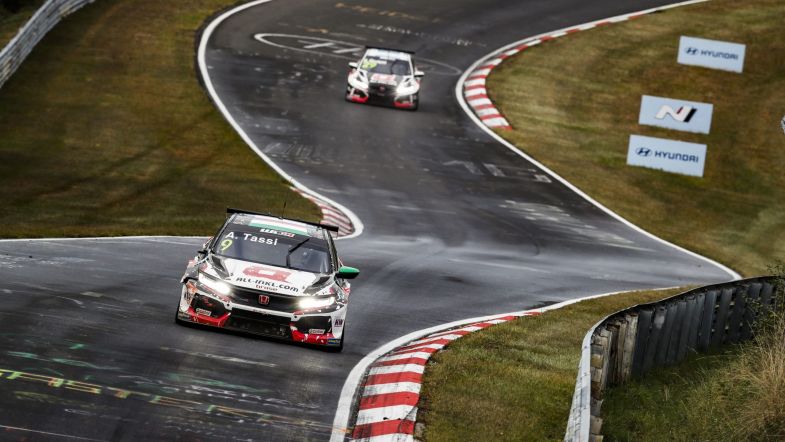 Attila Tassi hits out at Santiago Urrutia after race one clash

Attila Tassi has hit out at rival Santiago Urrutia after contact between the pair in the opening race of the weekend at the Nürburgring.

The Münnich Motorsport driver, who had set the pace in Thursday’s two practice sessions, was running in sixth spot on the third and final lap of the first race on the Nordschleife when a clash with Urrutia’s Lynk & Co saw him go off into the barriers.

It left his Honda Civic Type R with heavy damage and with plenty of work to be done overnight to repair the car in time for race two on Saturday morning.

“Urrutia completely crashed into me and put me in the wall; I was like a ping-pong ball and the damage is bad,” he said. “The brake disc from the front left was in pieces and there was no wheel, so I couldn’t even try to bring the car back to the guys to start work.

“I have no idea what he was doing and it was a very opportunistic move from him when his car is much quicker; there were plenty of places to make a move. I’m sure the team will do an amazing job and tomorrow we start from P3 so I want to go for the podium and will push as hard as I can.”

The contact also resulted in Urrutia failing to make the finish although the Uruguayan racer insisted that there was nothing he could have done to avoid Tassi having suffered a puncture just before the incident occurred.

“The race was going well, but as I passed Bebu [Girolami], we had a little bit of contact and I think I got a puncture on the rear,” he said. “It was very strange as I when I started to turn, I lost the car and hit Tassi. I feel bad for him but this is racing; it is what it is.”

Girolami, who was following the pair on track, was in the ideal place to see the incident unfold in front of him.

“We didn’t have the pace [of Urrutia] so he overtook me in sector three but then three corners later he had a puncture,” he said. “When he turned into the next corner he had big oversteer and crashed into Tassi.

“It was a big crash and Attila went into the wall hard; his wheel bounced in front of my car. It meant we managed to get P6 which was a good result.”